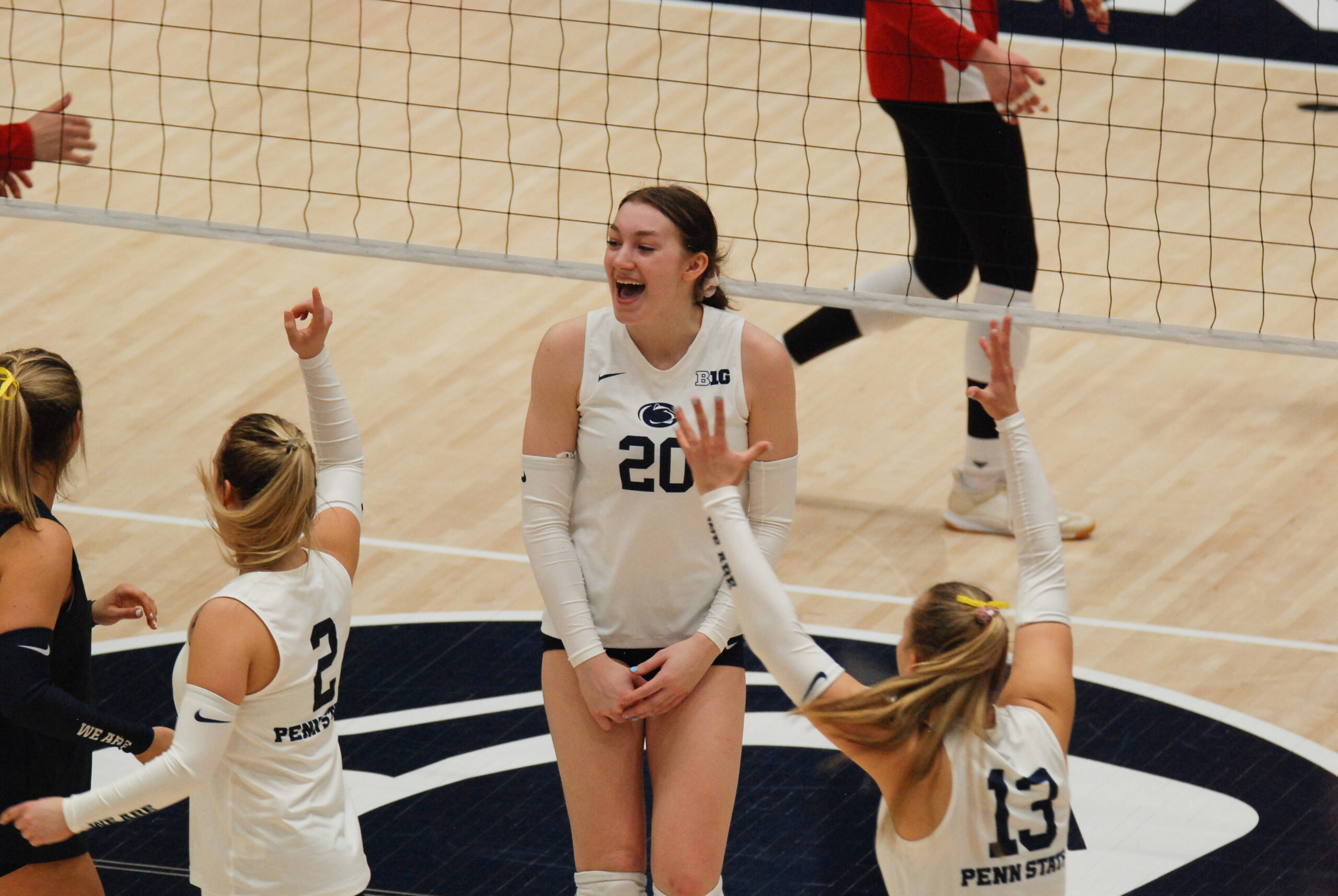 It’s been a busy offseason for the Penn State women’s volleyball program and its alumnae representing the U.S. on the international stage.

The return of in-person recruiting and several major club tournaments around the country, as well as prospect camps on its own campus, has provided the Penn State coaching staff with more than enough work this summer as it simultaneously prepares for the 2021 season.

The Tokyo Olympics are less than a month away, meaning Penn State alums Micha Hancock and Haleigh Washington are inching closer to making their Olympic debuts for the U.S. women’s national team. The duo made the 12-player roster when it was announced June 7. The opening ceremony is scheduled for July 23 and the games will finish August 8. Fellow Nittany Lion Megan Courtney was named an alternate at the libero position.

Below is a rundown of notable recent happenings related to Penn State women’s volleyball, including some promising news on the recruiting front for Russ Rose’s Nittany Lions, who open their season with a doubleheader August 27 against St. John’s and Georgia Tech in Orlando, Florida.

Hancock, Washington, and Courtney played key roles in helping the U.S. win its third straight FIVB VNL crown. The U.S. team, which is currently ranked No. 1 in the world, spent more than five weeks in a bubble environment in Rimini, Italy, and went 16-1 (swept by China June 26) in the 16-team tournament. The Americans rallied to beat Brazil 3-1 (26-28, 25-23, 25-23, 25-21) in the championship match June 25 after losing the first set. Washington started at middle blocker and had seven kills and one block in the win. Turkey swept Japan in the bronze medal match.

Chicoine started Penn State’s 2023 recruiting class with a major verbal commitment to the Nittany Lions June 24. The 5-foot-10 outside hitter/libero from McCutcheon High School in Lafayette, Indiana, is considered a top 10 prospect in the 2023 cycle and boasts upside at a variety of positions. Chicoine has a huge vertical leap and a thunderous swing. She plays her club volleyball for Circle City VBC and is currently in Las Vegas at the 2021 USAV Girls Junior National Championship with her 17s team. She also recently earned a spot on the 24-player U.S. U18 national training team roster, which will report to Anaheim, California, July 17-23. Twelve of those players will eventually be chosen to compete at the FIVB U18 World Championship Sept. 20-29 in Durango, Mexico.

Like Chicoine, Markley is currently the lone member of her recruiting class. Markley, a 6-foot-2 outside hitter, verbally committed to Penn State’s 2022 class on Sept. 4, 2020 toward the beginning of her junior season for McIntosh High School in Peachtree City, Georgia. Markley visited Penn State’s campus earlier this month and had a chance to meet with Russ Rose, Katie Schumacher-Cawley, and Dennis Hohenshelt. She shared a group photo in Rec Hall on her Instagram story during the visit. Markley was named a MaxPreps and PrepVolleyball.com All-American following a 2020 season that featured a Georgia 5A state championship for the Chiefs.

The DI Council recommended Monday that the Division I Board of Directors adopt an interim policy regarding name, image, and likeness at its meeting Wednesday. The decision could open the door for Penn State student-athletes to be paid in some capacity beginning July 1, although the athletic department has yet to announce anything definitive on the topic yet. Penn State middle blocker Allie Holland posted the following message on her Instagram story Monday: “According to the NCAA, starting July 1 all student-athletes have been granted permission to capitalize on our name, image, and likeness. When this goes into effect, student-athletes are going to be able to brand ourselves and other businesses and companies. Any local or any companies at all that want to use my social media as a platform to promote, do commercials, etc. to brand themselves, my DMs are open for business. Message me if interested.” Penn State quarterback Sean Clifford shared a similar message on his Instagram story last week.

Reed wrapped up her college career in 2018 with by far her best season in a Penn State uniform as a senior. Reed earned AVCA All-American honorable mention after tallying 336 kills, 76 total blocks, and 56 digs. She began her professional volleyball career with two seasons in Turkey, playing for Halkbank Ankara and Edremit Bld. Altinoluk before suiting up for Volero Le Cannet in France this past season. Reed follows in the footsteps of Megan (Hodge) Easy and Deja McClendon, both of whom have played in Brazil recently. Both McClendon and Easy played for back-to-back Brazil women’s volleyball champions Itambé/Minas, although their time with the club did not overlap the last two seasons.

White, a three-time All-American and two-time Big Ten Defensive Player of the Year who holds the Penn State record for career digs with 1,994, will return to Terville, France, this coming season after re-signing with TFOC. White was a fan favorite during her rookie campaign after turning pro for the 2020-21 season and taking her talents to France. She trained with the U.S. women’s national team in Anaheim, California, the summer before her senior season in 2019. White is easily the most decorated libero in Penn State history and her impact on the program will be felt for years to come.

Kuerschen, a 5-foot-9 libero/defensive specialist from Knoxville Catholic High School in Tennessee, was named her hometown paper’s volleyball player of the year following an excellent senior season for the Irish. Kuerschen originally committed to the University of Tennessee as a sophomore in 2018, but backed off her verbal pledge to the Lady Vols and eventually inked a letter of intent with the Nittany Lions on national signing day this past November as a member of Penn State’s 2021 recruiting class. Kuerschen will begin her Penn State career shortly alongside five other incoming freshmen.

Speaking of incoming freshmen, the Nittany Lions are welcoming a pair of Under Armour first-team All-Americans and Gatorade State Players of the Year in Anjelina Starck (Colorado) and Rachel Muisenga (Illinois). Starck, a 6-foot-2 outside hitter from Colorado Springs, led Rampart High School to its first 5A Colorado state championship in program history as a senior with 26 kills in the title match. She played her first two seasons for Las Vegas power Bishop Gorman in Nevada.

Muisenga was the first Benet Academy product to be named the News-Gazette Player of the Year. The publication covers 11 counties in the eastern portion of Central Illinois. Muisenga led Benet to a 10-0 record during an abbreviated 2021 spring season, but Illinois did not hold a state volleyball tournament due to COVID-19. Muisenga won a 4A state title as a junior after finishing with a 41-1 record in her first season as the starting setter for the Redwings.

Erika Williams, a 6-foot middle blocker from Kingwood Park High School and the Houston Juniors, offers some much-needed depth at the position for the Nittany Lions, who recently lost two-time All-American Serena Gray to the Pitt Panthers via transfer. Penn State returns three-time All-American and 2019 first-team selection Kaitlyn Hord and Allie Holland, a late addition to the team’s 2020 recruiting class who played well in limited appearances as a freshman this spring. Hord called Holland a “monster blocker” at one point last season.

Quinn Menger, a 5-foot-11 setter from St. Catherine’s School and Richmond Volleyball Club in Virginia, may end up playing some defensive specialist for the Nittany Lions this season given the logjam of talent ahead of her at the setter position, not unlike current starter Gabby Blossom’s role during her first year on campus. The Nittany Lions already have a reliable backup setter in third-year sophomore Emily Oerther, who provides more of a physical presence as a blocker than Blossom. Oerther will compete with Muisenga and Menger to retain her second spot on the depth chart during training camp.

The Nittany Lions recently added local standout Lexi Skripek of Bald Eagle Area High School and Happy Volley Academy to their 2021 recruiting class. Skripek and Kuerschen will compete for playing time at defensive specialist behind incumbent starting libero Jenna Hampton, Maddy Bilinovic, Keatan Broughton, and Sophie Walls. The additions of Skripek and Kuerschen will be important moving forward given that Broughton and Walls announced they are not planning to use their extra season of eligibility in 2022.

Penn State also added two impressive outside hitters via the transfer portal to jumpstart the offseason and infuse some extra talent to the 2021 roster. Erika Pritchard holds the Maryland career points record and has one season of eligibility remaining. Fresh off a first-team All-Big Ten nod, Pritchard instantly became the most experienced outside hitter for the Nittany Lions. She has 1,526 kills so far in college. Adanna Rollins earned second-team All-Big Ten recognition following a 2020-21 season in which she had 186 kills and 187 digs for the Minnesota Golden Gophers.