(Click this link or image below for NCAA Interactive Bracket) 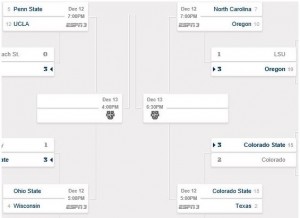 “[The energy] has to come from us.  We can’t look to anybody else.” 6-2 Sr. MH Nia Grant, in an interview with Patrick Kowalski, The Daily Collegian.

“You have a schedule that comes out and you look at the dates and the opponents and that’s what you prepare for.  You play all year long to get yourself into the tournament. Then you have to navigate different challenges when you get in the tournament.” Penn State Head Coach Russ Rose, in an interview with Patrick Kowalski, The Daily Collegian.

It’s tempting to look back at Penn State’s  September 6th win over UCLA in straight sets (25-19, 27-25, 25-17) and conclude that Friday night’s match against the Bruins will be more of the same.  That would be a mistake.  Both teams have grown and evolved during the course of the season, and just as you can’t cross the same river twice, you don’t really play the same team twice.  As Club Coach said in our Sweet Sixteen Q&A:

I actually think that generally speaking, the losing team is the team who may have advantage, as they may be more likely to look at the adjustments that need to be made, whereas the winner can have a tendency to say “let’s do what we did the first time.” The difference here is that Penn State doesn’t have the average coach. The Nittany Lions will be incredibly well-prepared.  UCLA can be scary because they have a player In Karsta Lowe who, if you get into a game 5, you can be in all sorts of trouble. She may be the best scorer in the country.

Then there’s that question of energy.  When Penn State plays with focus and passion (and keeps the errors down), they are very tough to beat.  When they don’t, well, they can end up on the losing end after a very long night, as they did in their 3-1 loss to Illinois on October 11th.  In that same Sweet Sixteen Q&A, Talking Head had this to say about Penn State’s energy level:

The Nittany Lions are executing at a phenomenal rate over the last half of the season, but I think they have even more gears in their transmission.  The “collective” energy level from the Penn State team has been at a workmanlike level, but I think we’re about to see that change, dramatically, for the better.  Coach Rose knows they have more to give, and of any coach around, he has shown he can get players to deliver.  I would look for PSU to open leads early and often to prevent a fantastic player like Lowe from having an impact deep in games.

We’d love for Talking Head to be right.  Certainly, past performances don’t give much comfort, as the Bruins have won five of the seven NCAA Tournament matches between the two teams — including the painful (for Penn State fans) straight set UCLA win in 2011 (25-20, 25-22, 25-21), which ended Penn State’s 26-match NCAA winning streak.  Only two players on UCLA’s roster played in that match: Zoë Nightingale (4K-0E-10TA, .400, 3B) and Karsta Lowe (1E-1TA in one set).

We are confident of one thing: #5 seed Penn State vs. #12 seed UCLA should be a great match.  We’re looking forward to it.

If stats won matches, Penn State would be all set.  The Nittany Lions top the UCLA Bruins in almost every statistical category except kills/set and digs/set.  Below is a table comparing the stats for the two teams, and below that, individual tables for each team. 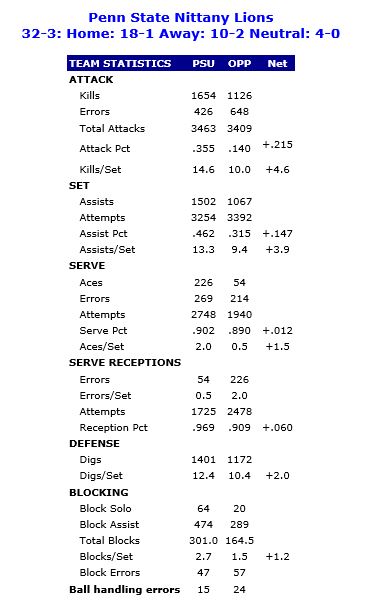 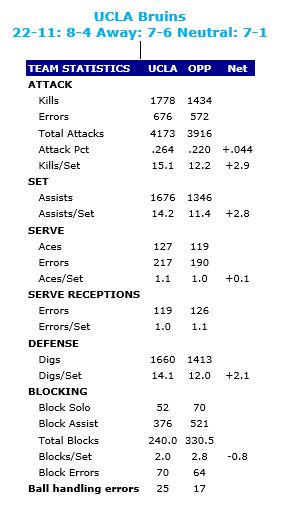