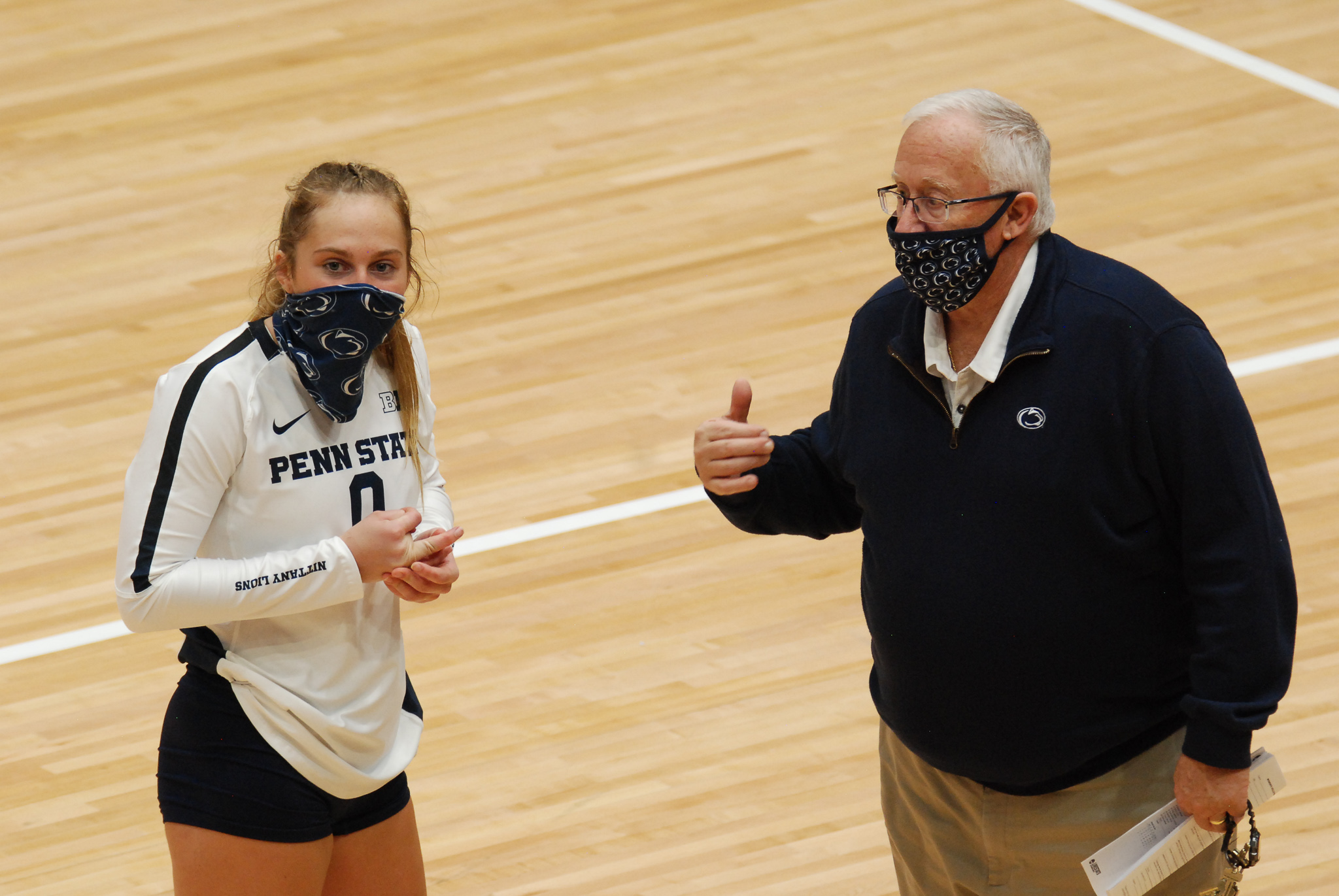 Penn State women’s volleyball head coach Russ Rose met with the media on Zoom Tuesday afternoon ahead of a three-match week for the Nittany Lions, who play Ohio State Wednesday at Rec Hall before hosting Purdue this weekend.

“It’s good to have an opportunity to play. I think the players were really disappointed that they didn’t get a chance to play last weekend [against Maryland]. We were coming off the Indiana weekend. We thought we had made some progress in some areas and thought we had a little momentum, even though we had some injuries that we were trying to work around. We, at least, felt that we were making some progress in play. It’s just hard to play and then be shut down and then try and pick it up again, so it’s been a real challenge I think for the players from that standpoint. We’ll be trying to play again tomorrow against the team that’s No. 1 in the conference right now in Ohio State.”

Q: What stands out to you about Ohio State in general?

“I think a number of things. I think probably the most significant thing right now about Ohio State is they’ve been involved in six five-game matches and they’ve won them all. I think a lot of that is just the fact that the team is playing really well together and every time you get yourself into a match like that and you find a way to be successful that you gain more and more confidence in how you’re playing and who you’re playing with. I think success kind of breeds success. We saw that a little bit when we played them at their place. We started out playing really well. I think we hit a few bumps in the road and [Ohio State] picked up and started playing really well. They’ve maintained that. They’ve got some veteran players as well as two really fine freshmen who are making great contributions at the middle and outside hitting positions. I just think it’s a team that’s playing really well together. It’s a team that’s a really good team.”

Q: What’s been your message to the team as they’ve needed to deal with postponements and bumps in the road so far this season?

“As I said earlier, it’s been a challenge. It’s not like I’ve had experience in other years talking about a season like this. It’s been new for me as well. It’s not that I would say I’ve done it well or anything along those lines, because I’m not really sure how one prepares to have those sort of conversations. We think you’re going to play and then you’re not going to play. You’re trying to get people healthy and then they’re not healthy. You don’t know who’s going to be able to practice and who can’t practice. It’s just been a lot of question marks in front of your day-to-day activities. It’s kind of how life is. It’s not always the way you want it to be. You need to find ways to battle through things. I think probably the most important thing is that there are lessons in sports. Hopefully they’ll be able to transfer some of the things that they’re learning, even though it may not be great. I tell people all the time, ‘Not all experiences are positive, but they’re all valuable.'”

Q: Coming off this long break, how do you make sure the team and you go into this match against Ohio State with a strong mentality?

“It’s not so much what I need to do. The players are aware of how the match went down. They were a part of the event, so it’s not as if the thing was done virtually. It was a match where we did some things well and we did some things where we didn’t play well. Ohio State did some things that they do well. Those things matched up and caused us some problems. They’ve been able to cause other teams problems as well. I think that’s the way it always is. Teams sometimes learn from the mistakes they’ve made and sometimes they repeat them. I’m not really sure how this team really matches up in that area right now. I think it’s been tough to assess it. I think it’s been a group that’s had so many challenges with health-related matters. You just have to deal with them — both the players and the coaches. You hope for the best and you go out there and you want the players to compete. You want them to have a good experience. You want everybody to feel that it’s a good opportunity for them to get better. Everybody cares. It’s not like, ‘Gee, your team cares and the other teams don’t care.’ Everybody cares. When your team is not playing well, the other team senses it. You’re responsible, a lot of times, for your own ability to get things going. I’m not going to sit there and pretend that we’re playing at our peak when we’re not. I expect the players who have a little more experience to carry a heavier load and not expect the freshmen to be anything other than freshmen. Sometimes you have freshmen and they’re unbelievable. Sometimes you have freshmen and you’re always saying, ‘Well, that’s kind of what you have.’ We’ve seen some really good freshmen in the conference. Minnesota has a couple of really strong freshmen. Ohio State, two of their freshmen are two of the top freshmen who we’ve seen. Again, we haven’t seen a lot of teams. We’ve only seen four teams. The season’s half over and we’ve only seen four teams. Certainly they have two really strong freshmen, but it’s a team sport. We’ve had a number of times where we’ve looked good in practice and we’ve had a number of times where we’ve had limitations where we couldn’t practice. That’s what you have to deal with.”

Q: What are your thoughts on the new Athletes Unlimited league?

“I’ve watched a number of the matches. I think it’s great that there’s a pro league in the country. I always enjoy watching Deja [McClendon] play. She may have a mask on, but you can see the smile in her eyes. I think it’s great. It’s nice to see Nia [Grant] still playing. There are so many players from the Big Ten playing in the league, so I’m familiar with a lot of the players. There are a number of players who are involved with our U.S. national team. I think Jordan Larson looks like she’s in incredible playing shape right now. I think it’s terrific. I enjoy hearing Salima [Rockwell] talking about all the action. It’s enjoyable. I think it’s good for the sport. I’m not glued to my computer to see who the teams are for next week. I don’t really care about that. I enjoy watching great volleyball. If the volleyball’s not great, the volleyball players are, so I enjoy that.”

Q: What can you tell us about Macy Van Den Elzen as a player?

“Macy was the Gatorade player of the year in Pennsylvania. I thought she had a really strong fall and then she had a little health-related issue. She’s been coming back from that. She’s a strong player at the net. She’s a good blocker and attacks well. I think she can play left side or right side. Unfortunately, there are times in practice when we have to put her in the middle, because we don’t have enough middles to facilitate practicing. She’s a wonderful girl. She likes to read, so we talk about books. I recommend books to her and she reads them, then we talk about it. I like having somebody who I can have book conversations with, so that’s been nice.”