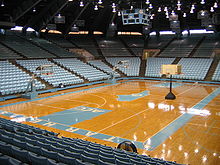 As expected, Penn State swept Campbell (25-15, 25-9, 25-16) to capture the Carolina Classic Championship, move to 3-0 for the season, and extend . . . well, in keeping with our solemn vow not to dwell on the streeeeeeeeeeeak (until we decide, for good, bad,  or totally capricious reasons, to dwell on it), we’ll just say that the Nittany Lions winning streak is now somewhere between 104 and 106 consecutive matches.

We’re still trying to get our mind around the concept of the Fighting Camels.  Here’s a look at some ostensibly “fighting camels”:

Now, compare them to this Fighting Campbell (OK, it’s just one, but I’m certain we could identify a few more):

Be fair.  Which would you rather have in your corner?  Fighting Campbells or Fighting Camels?  (And that’s putting aside the issue of care and feeding, which from what little I know of camels, is a major issue with them).

Fighting Camels aside, for a write-up on the match from gopsusports, Click Here.

And for final statistics from the match, Click Here.