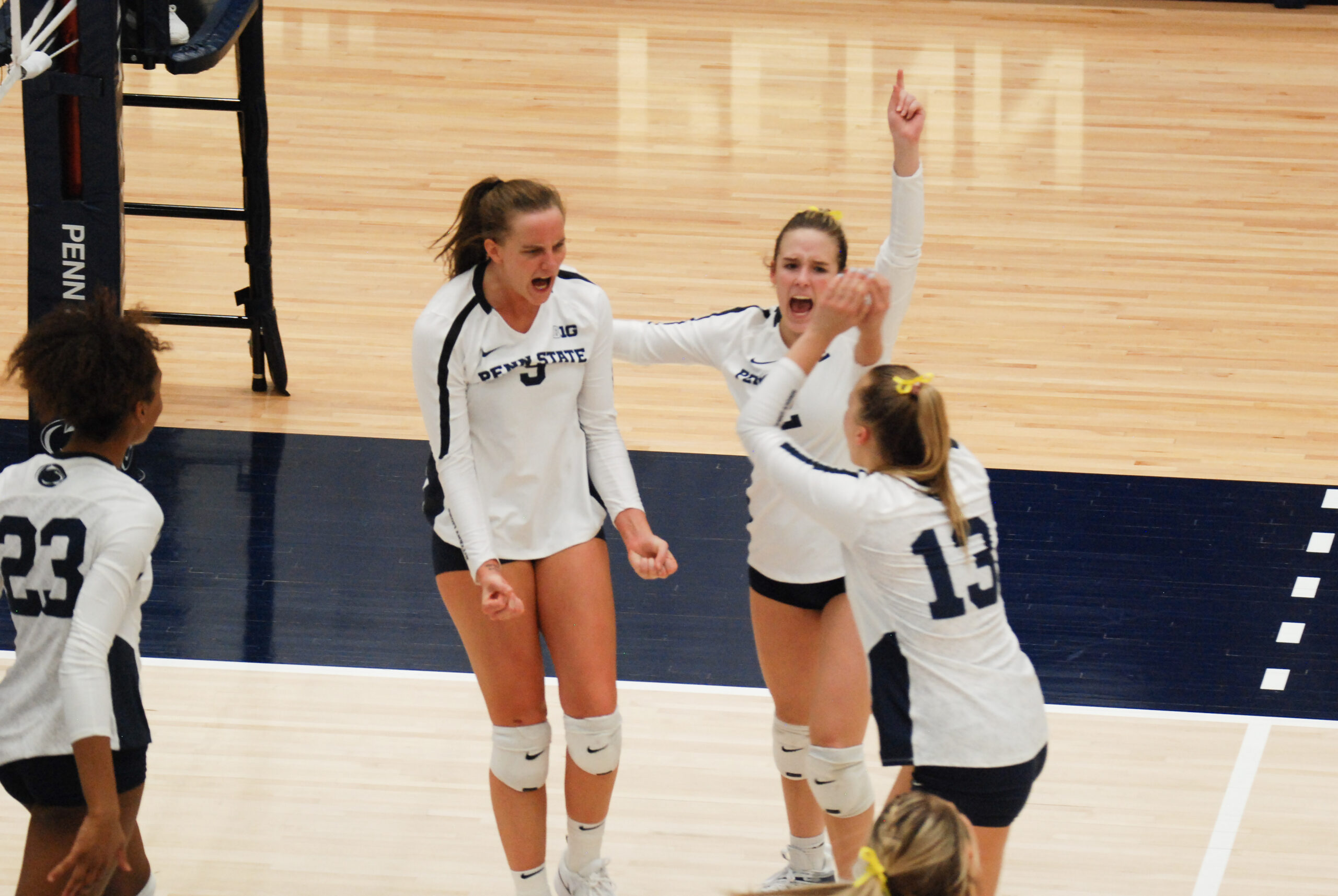 Fitzpatrick continued her impressive serving of late by tying her career high with four aces. Gabby Blossom, who had a match-high 29 assists, connected with Fitzpatrick for an outstanding kill to go up 21-15 in the second set when she found the freshman outside hitter with a beautiful pass despite falling to a seated position on the court. Fitzpatrick ended the first and second set with a kill.

Serena Gray and Anastasiya Kudryashova combined for 12 kills to round out Penn State’s scoring. Backup setter Emily Oerther eventually took over for Blossom in the third set and was among seven substitutes to see the floor for the Nittany Lions. Freshman defensive specialist Maddy Bilinovic paced Penn State’s defense with eight digs, while libero Jenna Hampton chipped in seven digs of her own.

Courteney Pitt led the MEAC champion Aggies with seven kills in the loss. Since teams are only allowed to have 15 players in uniform during the NCAA tournament, Sophie Walls, Molly Russell, and Sam McCool were wearing street clothes on the bench. Russ Rose improved to 105-32 in the NCAA tournament with the win.

The Nittany Lions (10-5) will play No. 4 seed Texas this Sunday at 5 p.m. ET on ESPNU with a spot in the Elite Eight on the line. The Longhorns (24-1) swept Wright State earlier Thursday thanks to strong showings from Logan Eggleston and Brionne Butler.

“First, what I would like to do is acknowledge North Carolina A&T on their season advancing this far, and also take an opportunity to pass on how we share in the disappointment that Rice and their program have about being unable to continue because of their positive COVID [situation]. We know exactly how that impacts a team and a program and I know how hard that has to be at this point in the season. As far as the event itself, I would just like to go on record as saying, it’s such an incredibly daunting task to try and put on an event of this size and magnitude for 48 teams with so many moving parts and intangibles. In spite of so much criticism that’s been extended, I think the volleyball committee, the organizing committee, and the people of Omaha have done a great job of welcoming the teams and doing everything they possibly can to make the championships as positive as they can in a really challenging year for everyone. Now, moving onto the match, I thought considering we haven’t played for 26 days, it was nice to get out there and play. I saw some real positive things. I thought Serena was playing really well offensively and Jonni had some good pop on the ball. I thought Maddy had some good service runs for us. AC took some good, aggressive serves from the end line. It was just nice to get a chance to play and get back out there. We know we’ll have our hands full when we try and prepare for fourth-seeded Texas in our next match, but we’re glad to have gotten a chance to play. We’re not nearly as good as we were before [the pause], but we’ve got a couple days hopefully to try and get better, and that will be what our intent will be.”

Q: The team’s serving looked great tonight. Was that something you had worked on specifically in practice given the extended break?

“To be honest, we only had 30 minutes on that court, so there wasn’t a real lot of time on practice. Again, I thought AC served really well and I thought some of the other people served in, so that’s probably what we saw. I think that’s probably just the end result of the kids being excited to have an opportunity to play. I thought we saw some good swings from a couple of different people. We had an opportunity to get everybody in the game for a little bit. We had an opportunity to see some areas that we know we need to get a lot better in, so we’re going to have to be a much smoother offensive team once we get around to playing Texas.”

Q: What are your thoughts on Serena and Kaitlyn’s performance tonight?

“At one point, Serena was hitting about .800, so that was good. Serena and Kaitlyn will be matched up against two of the most physical kids in the country on Texas, so that will be a real big challenge. I think Texas is one of the leading hitting and blocking teams in the country and traditionally is an incredibly strong, physical team, so they’ll have their work cut out for them. I’m glad that they, at least, had a chance to get their feet wet here in Omaha and get back out there and play. I didn’t think we were as crisp. In the third game, we just kind of got real slow. We had about a 10 or 15-point lead and I subbed some people in, then it just progressively got slower and slower.”

Q: What kind of things do you want to continue to build upon that were good tonight and what things do you need to change in order to face Texas?

“I don’t think Texas will get much from our film [against North Carolina A&T] and I’m not sure that we’ll get a lot from Texas’ film [against Wright State], but they’ve played a lot of significant, meaningful matches during the year. We played matches against some opponents where we really had to play at a much more significant, competitive level throughout early, middle, and late portions of the match, so I think there is a lot more data available than both teams showed today, but as I said earlier, Texas is one of the most physical teams in the country, and they always are. We’ve played them before. We haven’t played them for a few years, but I know that we’ll have a big challenge for us. I thought we would have had a big challenge as well with Rice. I spent a lot of time preparing for Rice and one of the videos I watched was Rice beating Texas. When I say I share in the disappointment about Rice having to bow out of the tournament, it’s with my awareness that they had such a great season and had beaten Texas [in Austin]. That’s not something that very many teams can do. I have great respect for what that really means, but how it translates to us is a whole different matter. We’ll have a lot of conversations and we’ll have to have a whole different sort of preparation and performance. The way we played tonight won’t provide much of a fight for Texas the way Texas is playing.”

Q: What impresses you most about Maddy Bilinovic?

“What I like the most about Maddy Bilinovic is she’s pretty resilient, because I’m incredibly hard on her and she’s still here. I think that’s probably what I like the most about her. She fills one really important void that we had with Kendall [White] and that is that she talks a lot. She’s loud. Tonight, she served the ball in a lot. I thought she passed really well. She dug balls that were hit at her well. She played really well considering she’s been injured for the entire amount of time since we haven’t been playing. I thought she played very well tonight.”