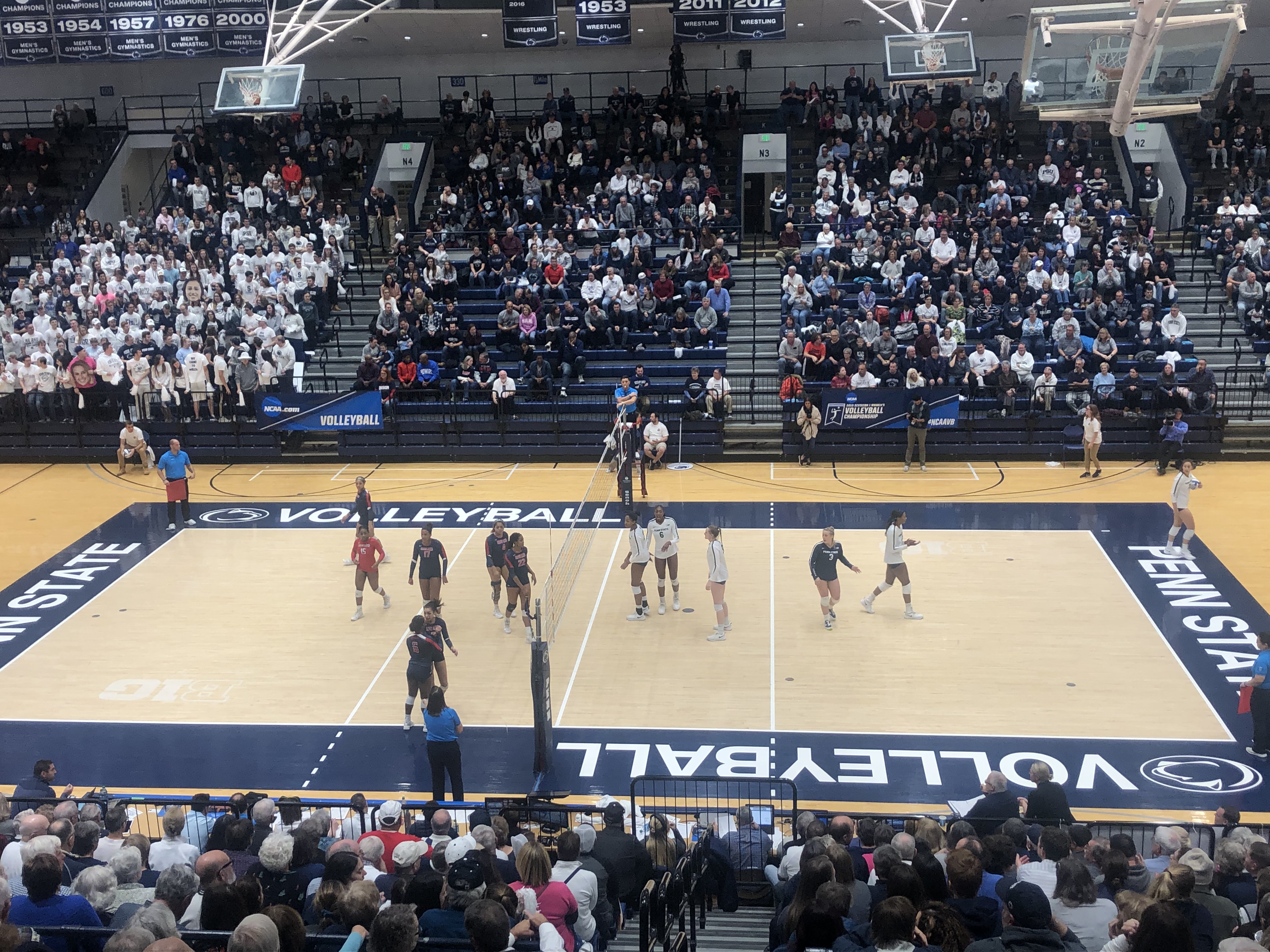 Jonni Parker led the Nittany Lions offensively with a match-high nine kills. She also had seven digs, five blocks, an assist, and a service ace. Penn State outhit the Bison .474 to .000 and delivered all seven aces of the night.

Junior libero Kendall White surpassed Dominique Gonzalez for fourth place on the program’s career digs list midway through the third set. She also broke the school record for digs in a single season in the 25-point rally scoring era.

Nia Reed put together a strong performance with eight kills in the victory, while Kaitlyn Hord and Taylor Leath added seven kills apiece. Tori Gorrell, who filled in at middle blocker for Serena Gray, finished with five kills and four blocks in her seventh start of the season.

Penn State sided out a ridiculous 96.3 percent of the time against the Bison. White and Gabby Blossom had two service aces each in a match that lasted just over an hour. Leath continued her excellent passing with 10 digs and Bryanna Weiskircher dished out 27 assists.

Russ Rose managed to get 14 different players into the match and divide up the workload, with no one taking more than 18 swings. The Nittany Lions (24-7) will host Syracuse in the round of 32 Saturday at 7 p.m. at Rec Hall.

“I’d first like to take the opportunity to recognize the seniors on Yale and Howard for leading their teams to the NCAA tournament. I always want to thank the university for supporting the program and putting in a bid to make it so we can host these events. It’s not a given across the country at every school. We had a lot of years where that wasn’t possible, so I’m appreciative of the fact that it is. I thank the booster club for buying 300 tickets for my student section out there, for the wRECking Crew. It’s great to have good support.

“I thought we played with good poise this evening and handled the ball well. Howard didn’t play the type of match they played earlier in the year when we played them at Howard, but I thought we kept the pressure on and we did a nice job. We controlled our errors, which is something I think we didn’t do so well in our last match, and I was really pleased with the effort of the team this evening.”

“I was happy with the offensive performance. I thought we did well out of the middle. Kaitlyn did a nice job. Everything comes if you can control the ball. I thought the passing was good and Bryanna did a nice job getting the ball to Kaitlyn, especially early. Nia and Taylor did a nice job and Jonni’s been hitting well for the last couple of weeks. That was a good situation. Tori did a nice job stepping in tonight for someone.”

“We don’t do that in practice. It was a combination. They were kind of out of sync a little bit tonight and we were in a favorable location I think for that. We’ve sided out 100 percent in games, but certainly not a match. I think it was more just a disparity this evening. We started out with good energy and I thought we maintained our composure as I said earlier.”

“It was definitely an amazing experience, especially starting the tournament, but we’ve got a lot of work to do and we can’t wait to get going.”

Nia Reed on the key to victory:

“I’d say keeping our errors down, because that rarely happens. Keeping our composure and just staying clean and calm throughout the whole match. We got pretty scrappy in the second set, but we served really well, which we don’t usually do.”

“We were at two errors a game and they were at nine errors a game. When you’re in a situation like that, you want to just go with the flow and give yourself a chance to keep the positive energy by keeping the ball in play and not giving the other team an opportunity to catch their breath and get back into whatever is a good rhythm for them.

“We played them earlier in the year and one of the games was deuce. It’s always tough to play on the road. We’ve played Howard four years in a row. My scouting report on some of these Howard players is really accurate. These are really good kids who play hard and are very athletic. The scouting report points to what it is they do really well. They didn’t show that as much tonight, but certainly over the four years that we’ve played them — this is the same team last year when we were No. 1 in the country that took a game away from us here at home. That’s the same Howard.”

Coach Rose on the academic resources available to players:

“Jim Weaver, who’s the volleyball team’s academic advisor, has been in the gym with the players the last two or three weeks talking to them about what’s coming up and what they should be thinking about and talking to their professors about in case of a specific scenario. Last week, we had a lot of ample time because of the break and we were here the whole team. The players really did have a good bit of time last week to try and get things organized. Jim was at practice Monday talking to the players. I get emails every time he communicates with the players and he copies me and I follow through. The communication is there.

“The players know the importance of focusing on the academic part of the relationship. It’s nothing new for them to be aware of that, but certainly the resources make things a lot easier for the players who especially need a little assistance. For the people who are Academic All-Americans and kids who have had great success academically, they’ve already kind of mastered the game, but for the younger players especially they get some good mentoring and help from people like Taylor, Nia, and Bryanna who have great grades and can assist them. It’s also good to have those people there and identifying the resources to make it so that they don’t stress out, because it’s easy to get stressed out.”

“I think she was great tonight. She always brings a lot of energy and she’s also a true competitor, so having her out there was really comfortable. It wasn’t like we had to over-play or do things that we don’t usually do. She just fit right in.”