Senior Micha Hancock directed the offense to a .500 hitting percentage, dishing out 32 assists to go along with four aces, five digs and five kills. Out-hitting the Hoosiers, .500-.208, the Nittany Lion hitting efficiency marks the best clip PSU has posted against a Big Ten opponent this year.

Defensively, nine different Nittany Lions chipped in at least one dig in the win, led by Hancock, who tallied five. Courtney and senior Dominique Gonzalez finished tied for second on the team with four each.

BLOOMINGTON, Ind. – After dropping the first set to No. 7 Penn State, the Indiana volleyball team battled to an 18-17 lead, but the defending national champion Nittany Lions, scored eight of the next nine points to win the set and eventually the match in three sets, 11-25, 19-25, 15-25 Saturday at University Gym.

In the first set a Penn State kill, two IU attack errors and a service ace by Penn State senior Micha Hancock, who leads the nation in service aces, put the Nittany Lions (18-3, 6-2 Big Ten) on top 4-0. Anderson connected on three kills in the opening set, but Penn State put down 14 kills and hit .700 to win the first set 25-11.

In set two it was a different story as five different players recorded kills and the Hoosiers hit over .600 through the first 18 points. The second set featured 13 ties and four lead changes with both teams extremely efficient on the attack.

[Editor’s Note: Contrary to GameTracker’s report of the match, Nia Reed did not play in the match — as reflected in these stats] 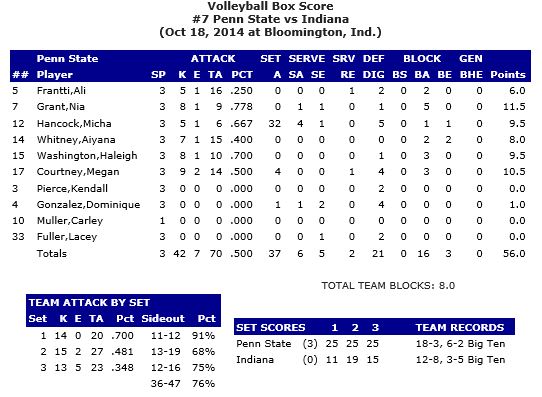 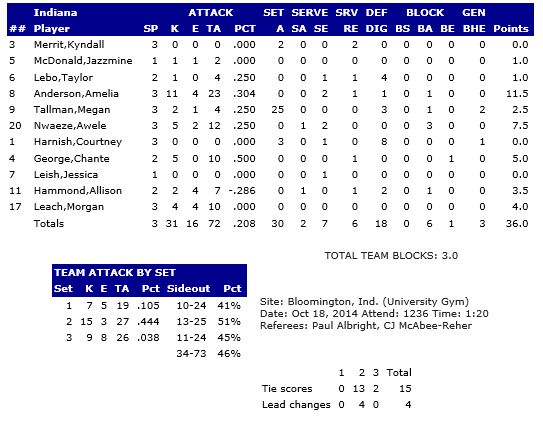