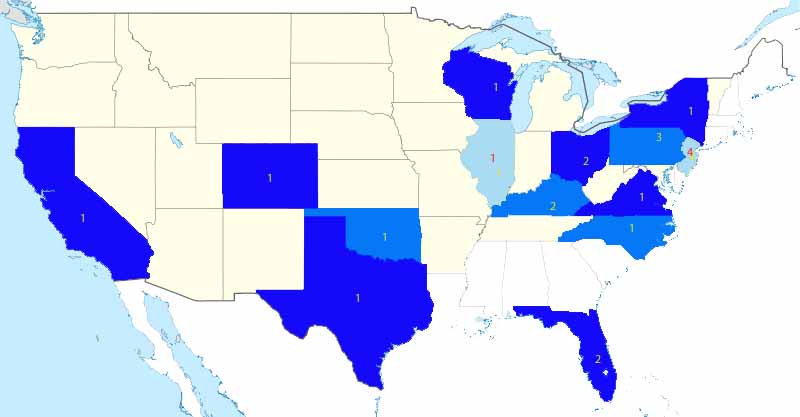 Penn State Head Coach Russ Rose and his staff must rack up alot of frequent-flyer miles.  Penn State’s 16 current (or soon to be current) players (see 2012 Unofficial Roster, below, which includes 2012 signees who have yet to enroll) plus the six publicly announced verbal commitments (see Recruiting Matrix, below, which lists the players we are aware of who have publicly announced their verbal commitment to join the Penn State Women’s Volleyball team, and who aren’t yet eligible to sign a National Letter of Intent and, obviously, have yet to enroll) are from 14 different states, ranging from California (1 player) on the West Coast, to New Jersey (4 players), Virginia (1 player), North Carolina (1 player) and Florida (2 players) on the East Coast, with New York (1 player), Pennsylvania (3 players), Ohio (2 players), Kentucky (2 players), Illinois (1 player), Wisconsin (1 player), Oklahoma (1 player), Texas (1 player), and Colorado (1 player) in between.  The map above shows the total number of players and/or verbals from each state (the map colors don’t signify anything other than the need to have different colors so that the state borders would be clear).

That’s alot of airports and rental cars, but we’re glad the staff puts in the hard work — the results speak for themselves.

So, in honor of all that traveling, we’ve included the video below, which really has absolutely nothing to do with volleyball or recruiting (we’re not even sure where it was filmed).  But we liked the images, and it is about traveling, so there you go.

The table is sortable by clicking on the arrows at the top of each column.  We last updated this table on April 25, 2012.