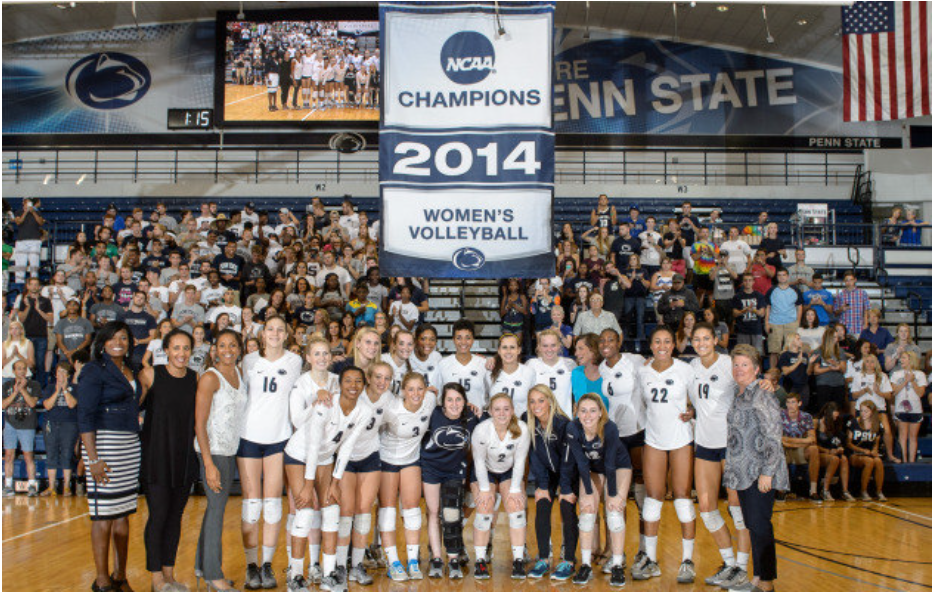 (Join the conversation at the DigNittanyVolleyball Forum)

A picture may be worth 1,000 words, but it may not tell the whole story.  The photo above (courtesy of GoPSUsports.com) certainly says it all about the ceremony rasing the 2014 NCAA Championship banner prior to last night’s match between a young, talented Penn State team and an experienced, determined Villanova squad.  But it doesn’t say much about Penn State’s sweep of the Villanova Wildcats (25-20, 25-23, 25-21) in the hard fought match that followed.

Penn State Head Coach Russ Rose summed the match up like this:

I thought it was a really tough, competitive match against a very good team.  I think Villanova plays exceptionally hard, they stress you out because they go pin to pin, and it’s a veteran team.  They have five players, plus the libero, back from last year, and they got a great transfer [6-3 So. OH Allie Loitz from Pepperdine].  That’s a very good team.  I would expect them to have success in their conference, and I’m happy because [Villanova head coach Josh Steinbach] worked for a number of years in our program and has been doing a great job at Villanova.

After taking the first set 25-20, Penn State struggled to close out the second set, with a 7-4 run by Villanova tying the set at 23-all.  Penn State then took the last two points (including an error by the Wildcats) to go into the locker room up 2 sets to none at the break.

In the third set, Villanova simply refused to yield, battling to a 17-14 lead that caused Coach Rose to call a timeout.  Three straight points by Penn State forced Villanova to call a timeout of its own, but Megan Courtney followed with an ace and Haleigh Washington came up with a kill to put the Nittany Lions up by 19-17. Penn State took six of the next ten points to win the set 25-21.

On the Team’s Performance this Weekend

It was a good start for this team.  I’m sure a lot of people want to know why a team that’s ranked supposedly #1 isn’t playing the #2 and #3 teams the first weekend.  We’re playing the #2 team the second weekend.  This team, with the new players and youth, doesn’t need to play the best team in the country to know the things they need to work on. . . . The good thing for us is that we had to grind tonight and I thought we did a nice job with that.   I don’t think it’s a team that’s going to go undefeated, but if they can compete, then they’re going to force other people to do the same.

I’m pleased [with her progress], I’m not necessarily surprised.  She’s a skilled player and I thought our best lineup tonight was when we had Kendall [Pierce], Taylor [Krause] and Keeton in the back row digging balls.  I thought at one point we looked like we had a real nice rotation.  She’s a different personality than I’m accustomed to in that position — [others have been] more vocal, being in a position where they’re telling the passers what to do and where to go.  But they served her the most balls this weekend and she can pass — she’s a really good passer.  She was out of position defensively a lot, but I don’t think we would have had the success we had if she wasn’t on the floor this weekend.

The lesson I told our players that I hoped they learned from Megan is she had two or three plays at the end of the game where she just stood and watched the ball go out of bounds.  A lot of people would get caught up in the moment and slash at the ball and even miss hit a ball that’s going out of bounds.  I thought she was a well-deserved MVP of the Tournament.

I think [the defense of Fr. Wilma Rivera] is better than Bryanna’s but I think Bryanna did a real nice job. . . . I thought she saved a lot of balls.  I’d like her defense to be better.  I think she would like her defense to be better — and we’ll work on it in practice so it is — but Micha’s defense wasn’t one of her strengths either.  Bryanna’s serve is one of her stronger suits. 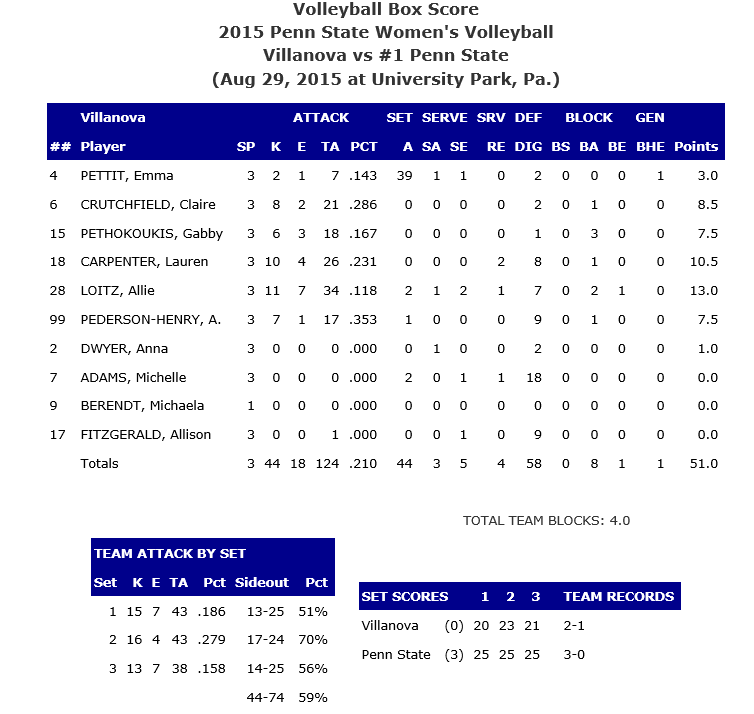