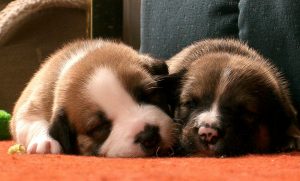 We’re posting this on January 27, 2017 — more than six weeks after Penn State’s oh-so-close-but-no-cigar loss to #1 seeded Nebraska, in Lincoln, in five sets.  A tad late, yes, but in our defense, it’s been busy times since then for us and the ever-diligent DigNittany staff  — we’re trying a new tact with them, flattery.  Now we find ourselves in a January lull, so we’re tying up loose ends.  This is one of them.

We had it and we didn’t close the deal.  A couple kids ran out of gas. Some of the players should be disappointed in their effort, their preparation.

So the Nittany Lions went home for the second season in a row after losing in the opening round of the Sweet 16.  That has some Penn State fans grumbling.  But the thing is, every significant offensive performer is back for the Nittany Lions for the 2017 season.  Plus incoming 6-3 Fr. MB Cami May.  Plus maybe a transfer in or two (we’re totally speculating, but you never know).  Maybe in 2017 the bench will be deeper, and the added experience will pay off, and Penn State will challenge again for an NCAA Championship.  They came within a swing of moving into the Regional Semi’s in 2016.  We like their odds for 2017.

After four grueling sets, three being decided on deuce games, a ticket to the regional final came down to a fifth set. Nebraska scored the first two points before junior middle blocker Haleigh Washington slammed down her 10th kill to make the score, 2-1. Two plays later, junior outside hitter Simone Lee notched a kill before a Huskers error tied the set at 3-all. Nebraska would go on to score the next three points, forcing a Penn State timeout, trailing 6-3.

Out of the break, Lee posted another kill to cut the gap to two. Nebraska took the next two points with an 8-4 advantage at the break. The Cornhuskers aced Penn State the next play out, prompting a timeout as the Nittany Lions trailed, 9-4.

Frantti posted her season-best 21st kill out of the break before a block by Lee and junior opposite Heidi Thelen cut the lead to three at 9-6. Nebraska went on to take the final six points and a 15-6 set five victory. 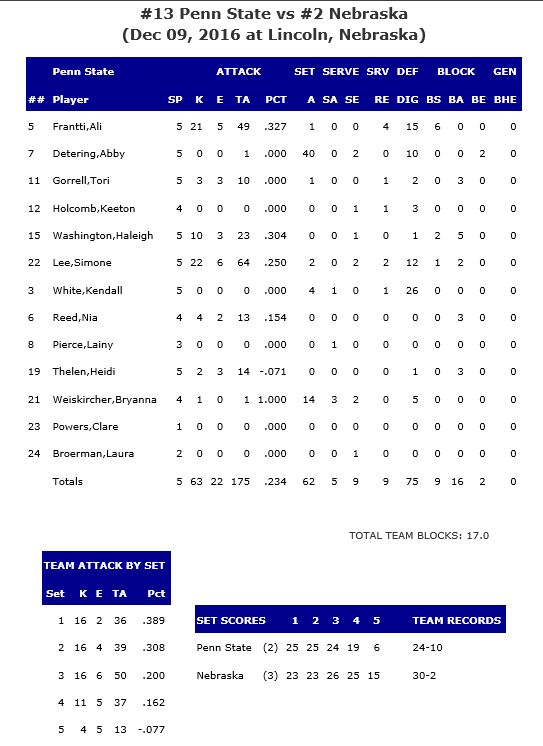 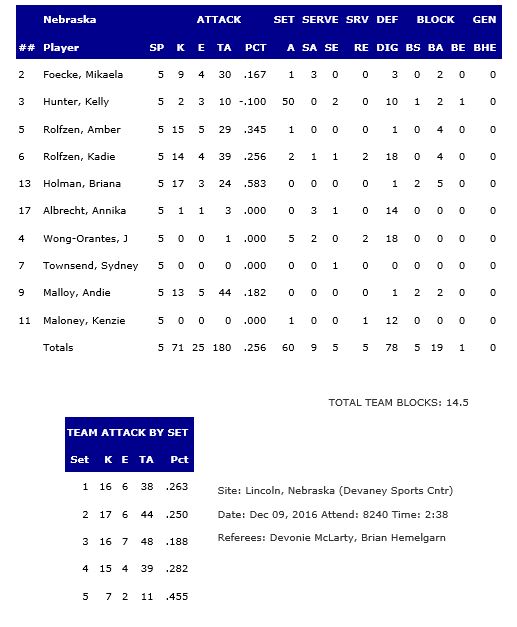