Quote of the Day:

We out blocked them and out hit them so I don’t know if they out muscled us.  If the question is ‘did you stop Tori Dixon?’ I don’t think anybody really stops her.  I think she’s an incredible talent. Seventy-five percent of their swings went to three hitters, and you know where they’re going but they still had the ability to score. Russ Rose, quoted in an article by Wynton Jake Somerville, The Daily Collegian.

At one point in the match, color commentator Liz Tortorello-Nelson, describing the exceptional play of the Gopher’s 6-3 Sr. MB Tori Dixon, said “She’s on fire.  She’s running on all cylinders!”  We have a suggestion for Minnesota head coach Hugh McCutcheon: the next time Penn State plays you guys, if Dixon is both “on fire” and “running on all cylinders,” as a public safety measure, you need to turn off her engine.   That’s waaaaay too dangerous .

5-11 Sr. setter Micha Hancock guided the Nittany Lion offence with a career-high 67 assists, to go with four kills, eight digs and one block. 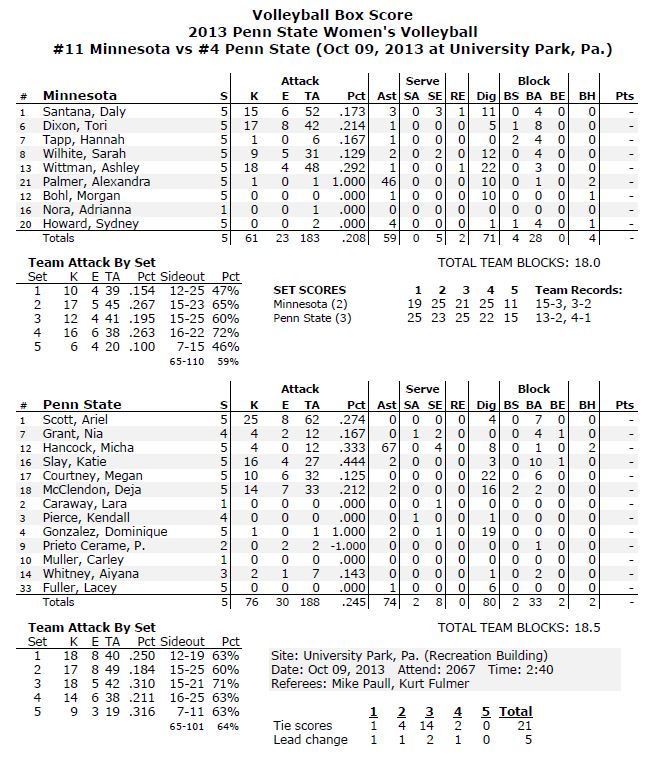