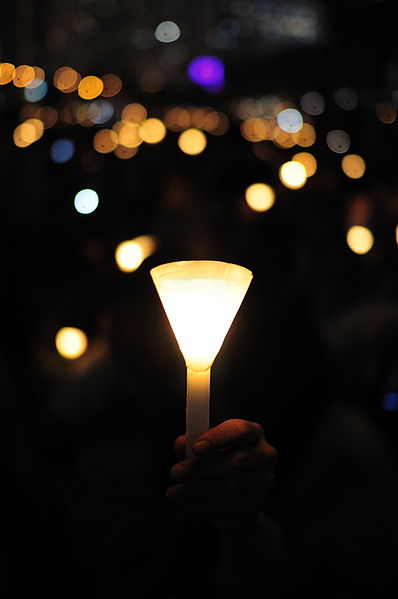 UNIVERSITY PARK — Some sat in glass jars, others in plastic cups.

There were candlesticks, tea candles, fat candles, many with paper plates and cups to catch wax. A few were battery-powered.

Held aloft by the thousands, they formed a sea of flickering flames stretching to the back of the Old Main lawn.

And in a moment of silence broken only by 10 bells chiming the hour, the lights spoke straight from the hearts of Penn State students trying to recover from a turbulent week.

“Really, the only thing you can do is band together and be one again, and get it back on the road,” said Eric Bella, a junior from Wilkes-Barre.

Friday night, he joined a sprawling crowd gathered for a candlelight vigil in front of Old Main to show their support for the victims at the center of the scandal rocking Penn State and the local community, and to counter the images of rioting classmates beamed to the world.

We have not addressed any of the allegations in the Attorney General’s presentment in the Sandusky matter, or any of the subsequent actions by the Board of Trustees or others. Our silence has not been out of lack of concern for the victims and their families, or for the many troubling and difficult issues raised. We, like the entire Penn State extended community — including the entire volleyball team and coaching staff — have been struggling to comprehend these events. On Thursday, November 10th, Rodney Erickson, the interim President of Penn State, posted the following message, which captures much of what we have been trying to find the words to say:

A message from Rodney Erickson

This is one of the saddest weeks in the history of Penn State.  It has been difficult to comprehend the horrific nature of the allegations that were revealed in the Attorney General’s presentment last week. As a member of the Penn State community for 34 years, as a parent, and as a grandfather, I find the charges as they have been described to be devastating, and my heart goes out to those who have been victimized and their families. This is a terrible tragedy for everyone involved, and it will take some time to bring a measure of understanding and resolution to the community.

In addition to the legal process under way, Penn State’s Board of Trustees has authorized a full investigation “…to determine what failures occurred, who is responsible, and what measures are necessary to insure that this never happens at our University again and that those responsible are held fully accountable.”  As those involved pursue their cases, I also urge you, as Penn Staters, to be patient, to avoid speculation, and to refrain from passing judgment until the facts are known.

As you are now aware, the Board of Trustees has asked me to serve as the interim president of Penn State effective immediately. I undertake these duties with a firm sense of resolve, and I ask for your support as we move forward. And move forward, we must and we will.

Penn State has a long and storied tradition that has endured for more than 150 years. Our roots are deep, our constitution is resilient, and the importance of our work is as vital today as it was last week – perhaps even more so in the face of such adversity.  We are 96,000 students, 46,000 employees, and more than a half a million alumni. We are 24 campuses across the Commonwealth and a World Campus. We are a university that is committed to its core values of honesty, integrity, and community.  We are a university that will rebuild the trust and confidence that so many people have had in us for so many years.

Through your conduct every day, you can play a role in restoring the integrity, honor, and pride that have always characterized Penn State. I share your anger and sadness in this time, but always remember that your actions reflect on the entire Penn State community. Please set an example that will make us all proud. Moving forward is the only responsible course to take in the coming months. I ask for the full support of our faculty, students, staff, and alumni, and in return I will do my best to lead this institution through the challenges ahead.

Thank you for being a part of Penn State.