The 2012 Olympics kick off today, with the #1-ranked U.S. Women’s Indoor Volleyball team opening at 3:00 p.m. EST against #13-ranked Republic of Korea.  We don’t know much about the Korean team, other than that, according to their official bios on the 2012 Olympic website, among the hobbies of 5-11 WS/RS Yoo-Mi Han and 6-1 WS/RS Song-Yi Han is “eating Korean food.”  We’re assuming that among Koreans, that hobby is pretty widespread. ( To be fair, we also assume that “eating Korean food” may be a loose translation of something like an American athlete saying their favorite food is “pizza.”)

Food aside, even without any “inside” scoop on this match, you have to like the odds of #1 versus #13.  We’ll be watching Megan Hodge and Christa Harmotto (shown below) and the entire U.S. Team, and will have a post-match writeup later today or early tomorrow. 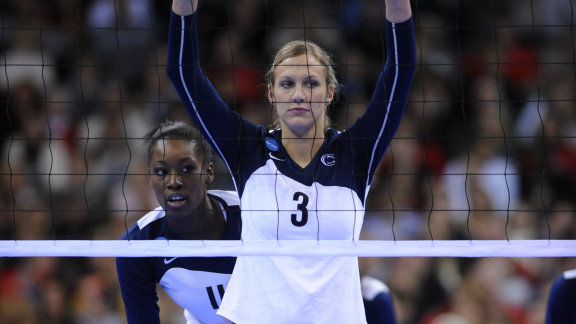 In the meantime, below are the rosters for both the U.S. and Korean teams, the full schedule for the U.S. team, and the rankings, as of January 4, 2012, for all of the teams competing for the 2012 Olympic  Women’s Indoor Volleyball gold medal.