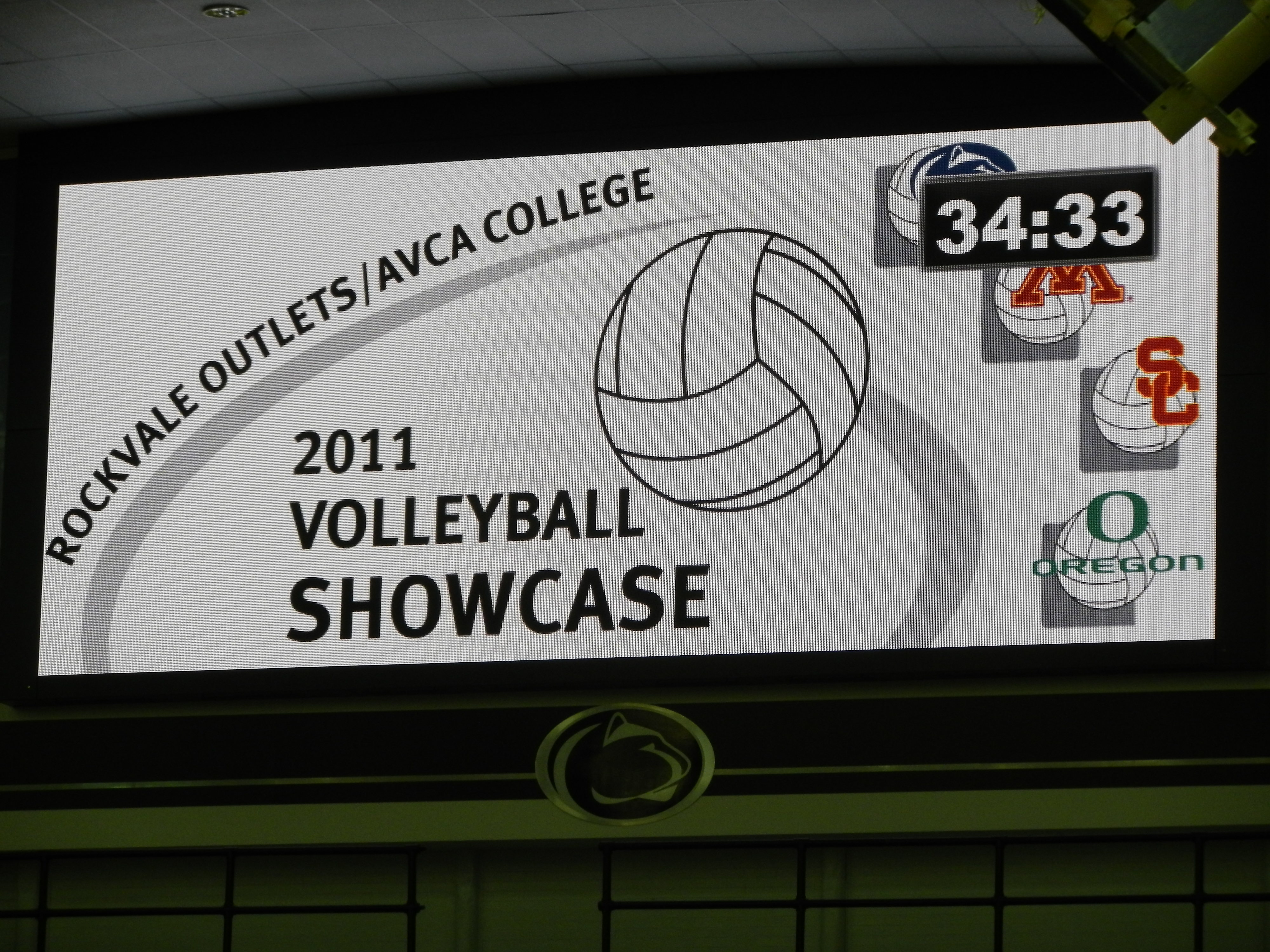 Hurricane Irene has moved on, and our crack team of DigNittanyVolleyball technicians finally has us back online.  So, although we’re a bit late, here are the post-Penn State vs. USC interviews with Penn State Head Coach Russ Rose, 6-1 So. OH Deja McClendon, and 5-11 Fr. S Micha Hancock:

We normally don’t like to brag, but the DigNittanyTV News staff really scooped the rest of the media when we were able to grab an exclusive interview with Bam Bam (not his real name), the Penn State student who is credited with starting the “Boom” cheer from the crowd after each of Micha Hancock’s serves.  Take a look:

On Crowds, Competition, and Sportsmanship

After Saturday night’s match against USC, Penn State Coach Russ Rose said this about the atmosphere at Rec Hall and the impact of the crowd and the band:

It was the best crowd for a women’s volleyball match that I have seen in 33 years. I want to applaud the crowd and the student section and the band especially for keeping the building alive.

So here’s to the fans and the band: 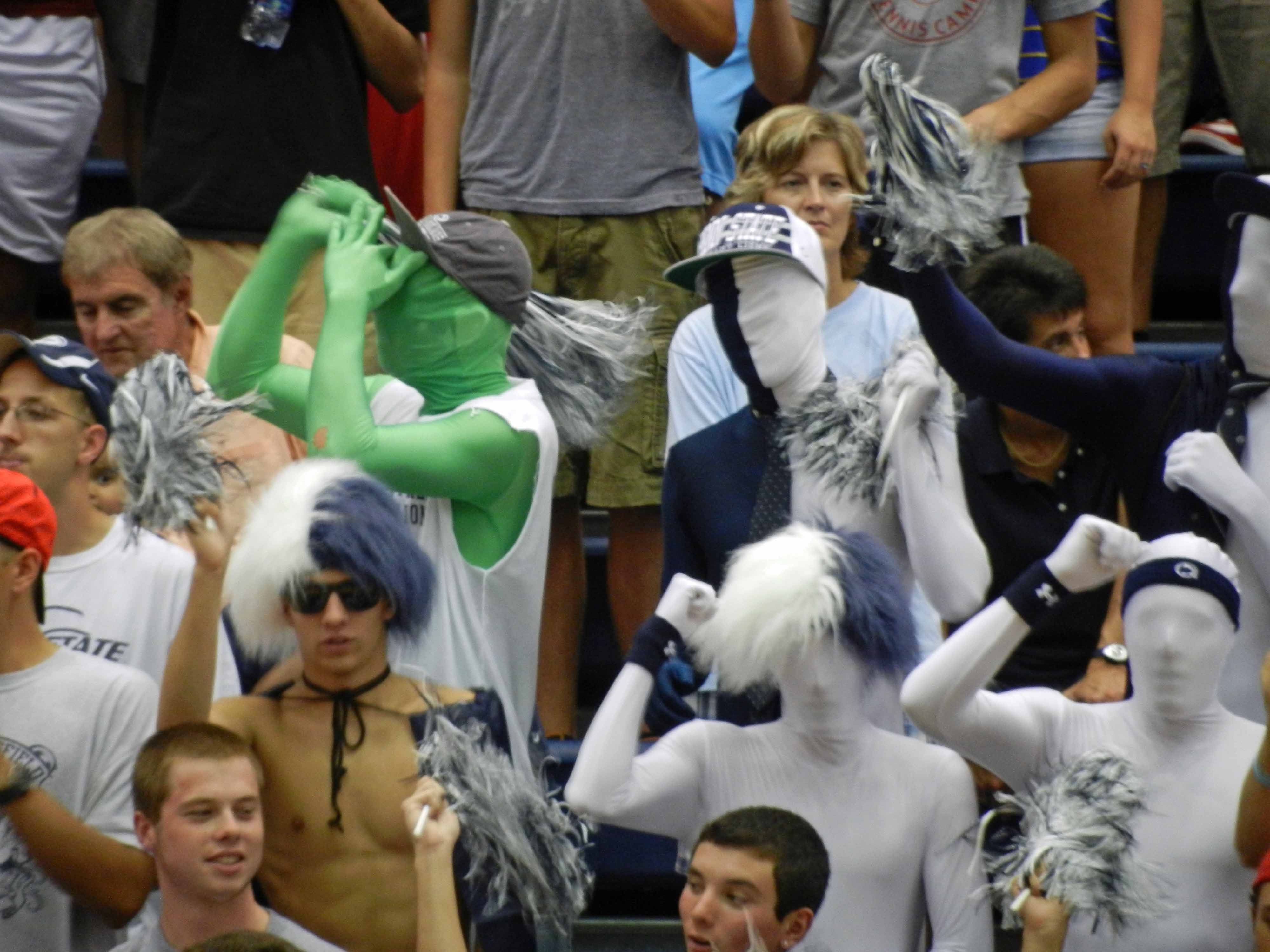 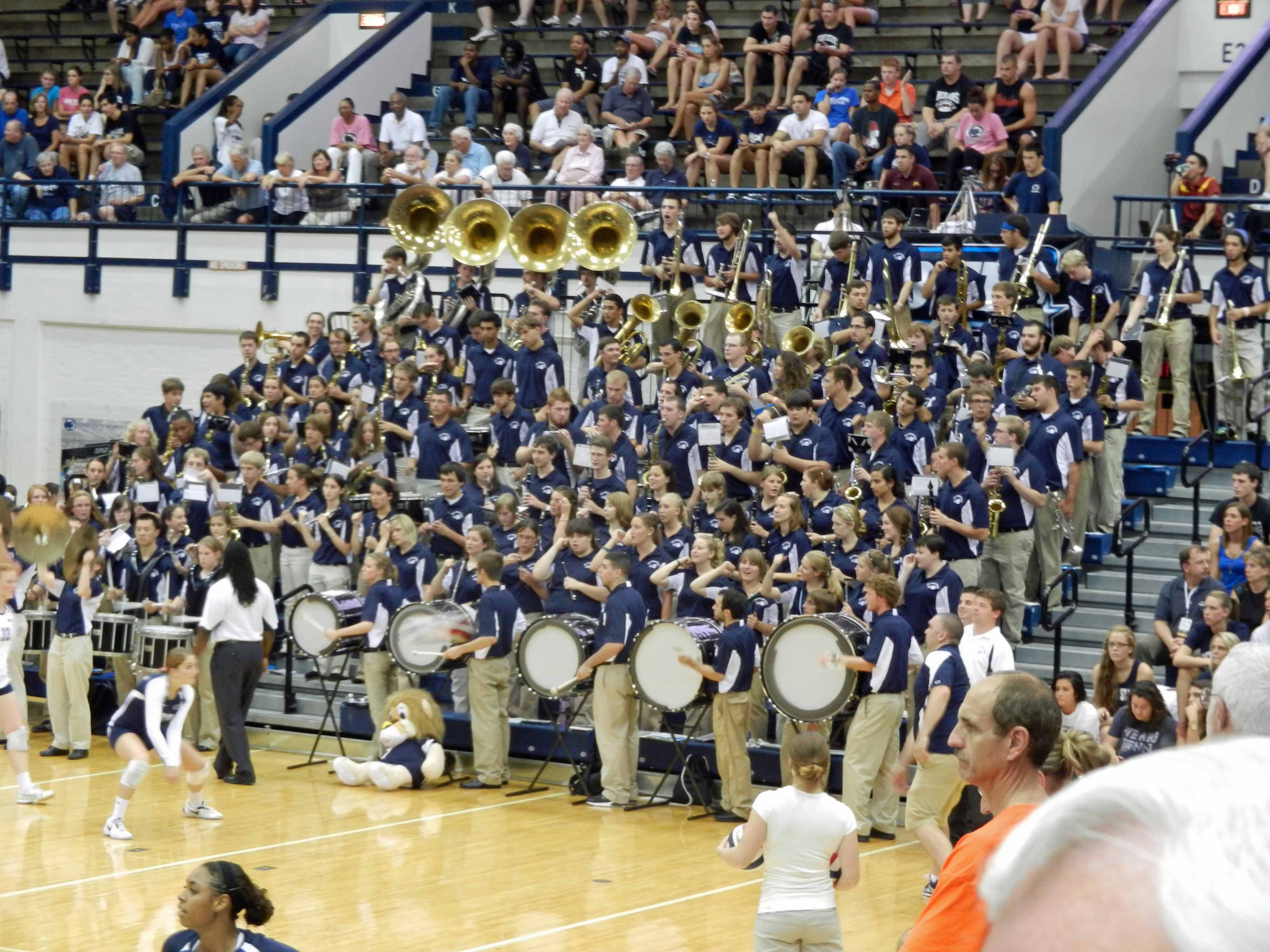 And it was a fantastic atmosphere (well, maybe a trifle steamy, but very exciting). But one thing that struck us, starting with the Friday luncheon before the match, to the pre-match warm-ups, through the matches themselves: the coaches were friendly and gracious, to each other, to the opposing players, and to the fans. The coaches are laser-focused on winning — it’s what they do — but they treat each other with respect. 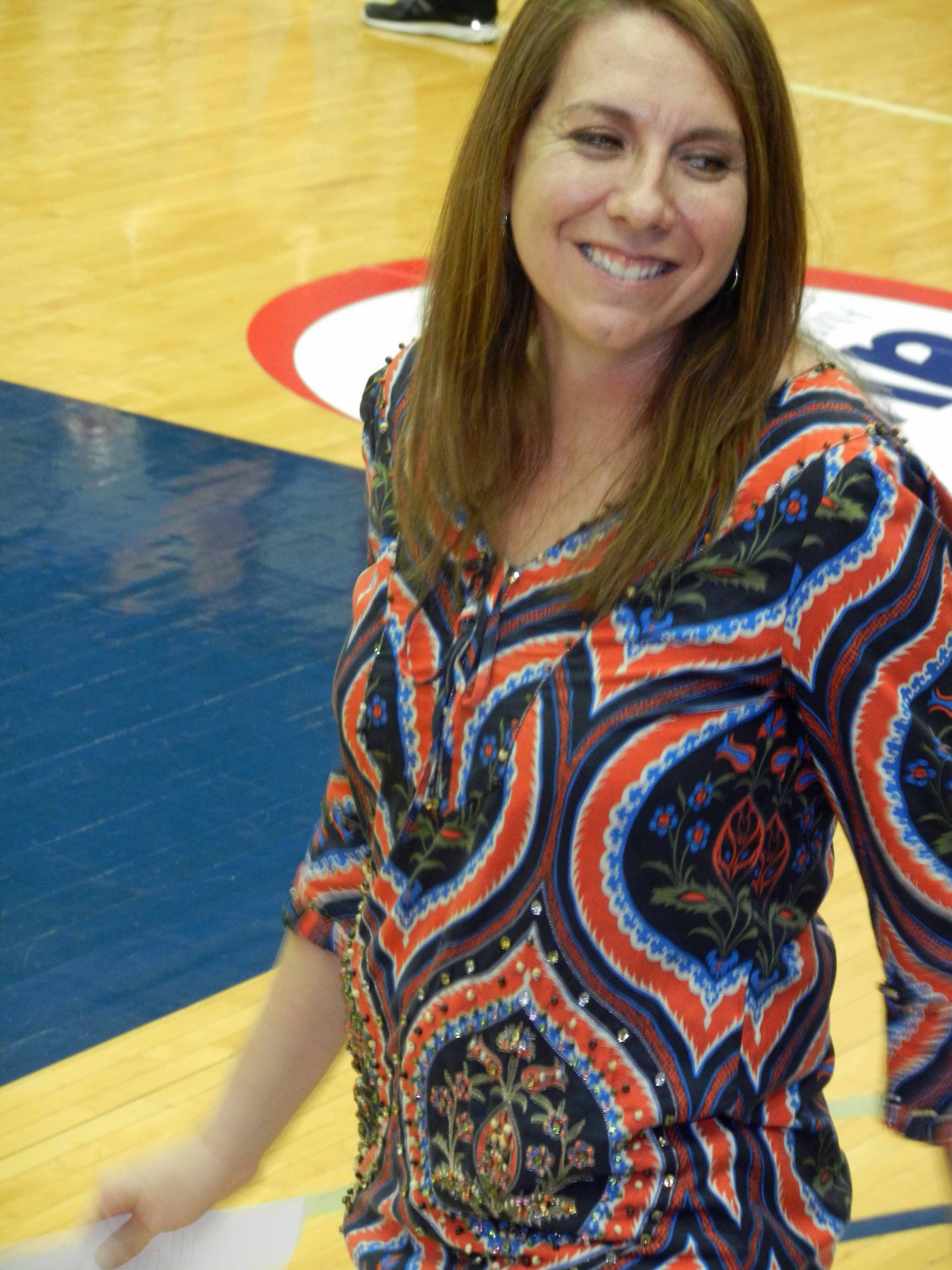 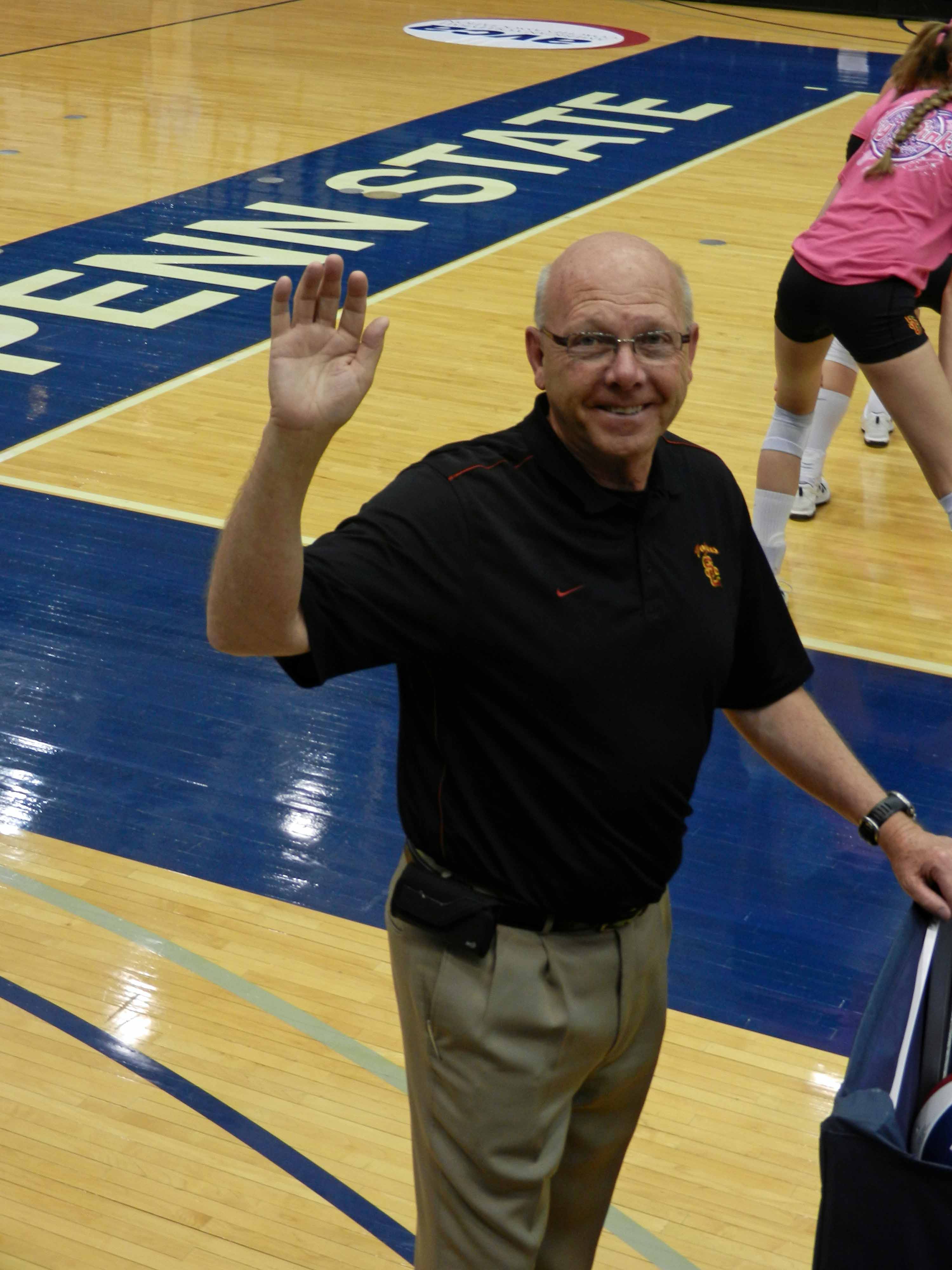 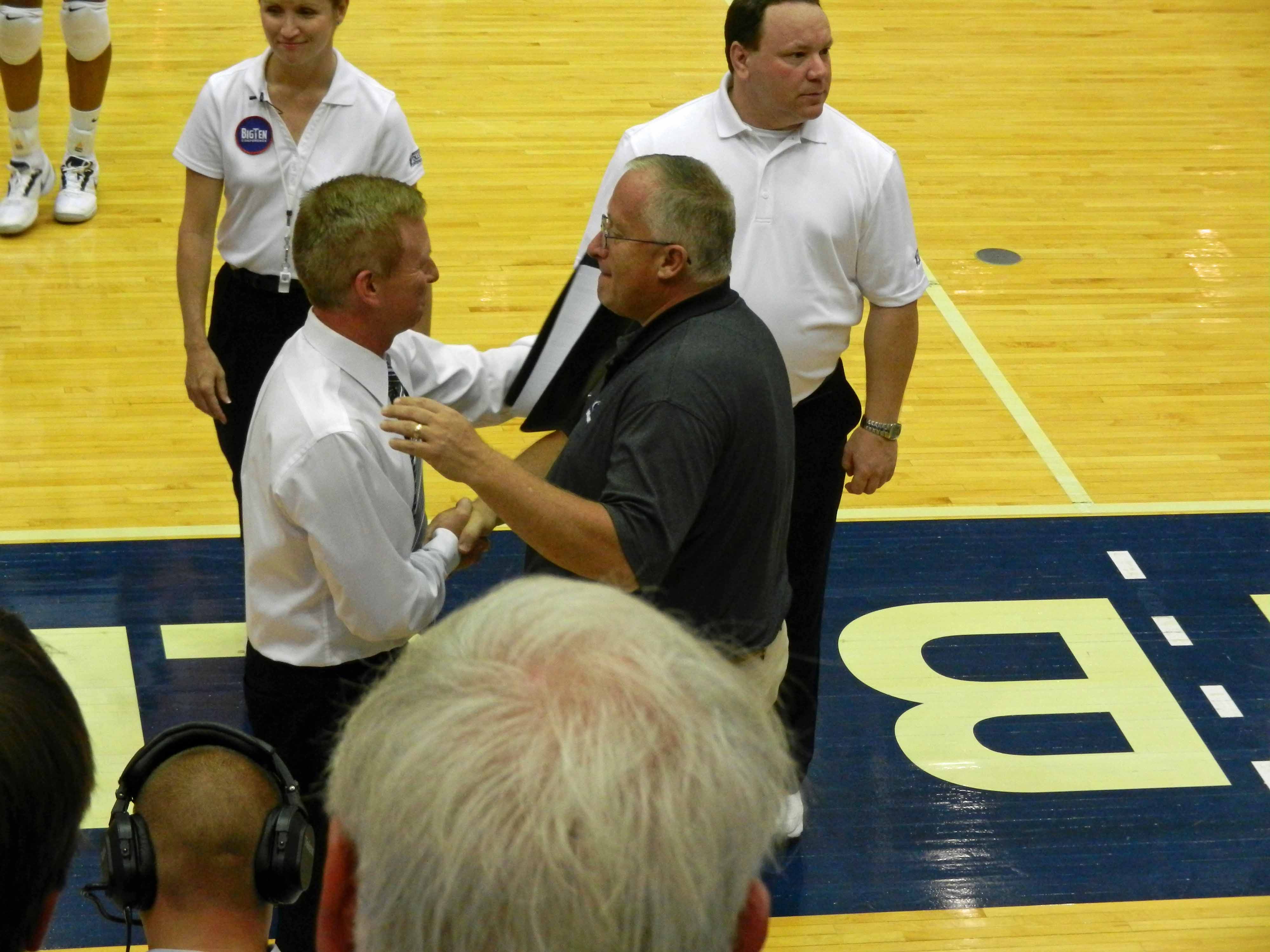 Which brings us to an e-mail we received from Amy, one of our readers.  Amy was at the match on Saturday and sat next to an Oregon fan who told her that the Penn State fans seated next to him on Friday night treated him with more respect than he had ever experienced as an “opposition” fan.  He said that the experience had renewed his faith in sport.

That may strike some as a corny story, but not us.  It goes to the heart of what we like about the sport of volleyball:  The competition is relentless and passionate, and the coaches and players devote themselves to being the best.  But the coaches and players seem to appreciate that it’s a game, and their opponents are people.  And you try to treat people with courtesy and respect.

So kudus to the Penn State fans who sat next to that Oregon fan on Friday night.  As Amy said in her e-mail: “WE ARE Sportsmanship!” We’re still hoping that sports message boards can embrace that same spirit.