Oh my beloved Lions . . . you turn in one of your most impressive wins of the season in your sweep of Purdue, hitting almost .400 (yay!); then one day later you drop a set to conference caboose Indiana—hitting under .200 in the process (boo!). Is it any wonder Coach Rose isn’t ready to vote you No. 1?

What to make of this hot-and-cold pattern?  Please pick it up and focus! But the Lions have company in the B1G, which is full of teams that are afraid to make any weekend statements. Only the Lions, Huskers and Wolverines won both of their contests.

Which brings us to the subject at hand. The polls are out (including DigNittany’s North Poll Pole, see below), and they’re a bit like the latest edition of As the Pac 12 Turns.

Stanford asserted its alpha dog status by handling UCLA and USC.  The only top dog left on the Cardinal schedule is (conveniently) the Huskies — and this weekend’s Battle in Seattle will be the first conference road test for the Cardinal.

Like Penn State earlier this year, some question how good Stanford can be away from home against the best in their conference.  We’re betting they will compete just fine . . . but the Huskies will probably be fired up after dropping their first match of the season (a 3-1 decision at the hands of rival Oregon), and we’re also betting that the crowd shows up to bark nice and loud (sorry, no more canine quips).

Regardless of how it all shakes out, the conference will have four serious title contenders by the time the tournament rolls around — and that’s something our West Coast brethren can wag their tails about (oops, I did it again!). As for the Trojans? Still not sure about them.

We’ve seen this before: favored team falls from grace and everyone thinks “maybe next year.”  They drop from a spot in the top 4 to 8, then 13.  No one really talks about them anymore.  But then a funny thing happens . . . they quietly get the job done before slowly rising up the rankings again, landing at No. 6 before the tournament starts in a year they host a regional.

That was Texas in 2010, and the Longhorns seem to be following a similar path this year.  After three losses to Big Ten teams and a poll drop from #2 to #9, the Longhorns have righted the ship and seem to have the wind at their back.  Texas followed up a road sweep of Big 12 rival Kansas State with two more important wins over ranked foes: a 3-2 thriller at fellow RPI darling and Final Four host Louisville, and a sweep of rising conference challenger Kansas.  The only danger game left on the schedule is probably at Iowa State in the regular season finale, but by then they might have a No. 1 seed locked up anyway.

We’ve added a new voter to this week’s North Poll Pole — Stanford Head Coach John Dunning.  Of course, Coach Dunning has never heard of the North Pole Poll, and, like the votes of Penn State Head Coach Russ Rose, we’re using his votes from this week’s AVCA Poll.  But we thought it important to balance out our East Coast Bias (which has caused us to never vote Penn State #1) with West Coast Perspective.  The fly in that ointment?  Coach Dunning went and voted Penn State #1 and Nebraska #3.  Oops.

While there’s only one marquee matchup this coming week, there are a lot of potential upsets in store as the conference season reaches its halfway point.  Some important contests can solidify tournament hopeful teams and seeds.

Yes, the Stanford/Washington match is the one to watch this week (or not watch . . . damn you, Comcast!!!), but we’ll also have our eyes on the battles for Kansas and Michigan as the Wildcats visit the Jayhawks and the Wolverines visit the Spartans.

Two notable moves this week: Texas bolts up to #4 (that’s a sigh of relief to other non-hosting No. 1 seeds), and Purdue climbs back into the Top 16. If the tournament were held today, based on RPI, predicted future results* and my Magic 8 Ball, here are the predicted brackets:

*I relent…Stanford is a top seed. What have I been thinking all these weeks?!  Even if the Card were to split its remaining big Pac-12 matches, they’d still settle in the top 4, most likely staying on the comfort of the West Coast.  USC flirting with the danger zone, and could be relegated to a lurking danger instead of a seeded team (watch out, BYU!). I still think Penn State is in the driver’s seat for the Purdue regional, especially with the Longhorns’ rise in the RPI. 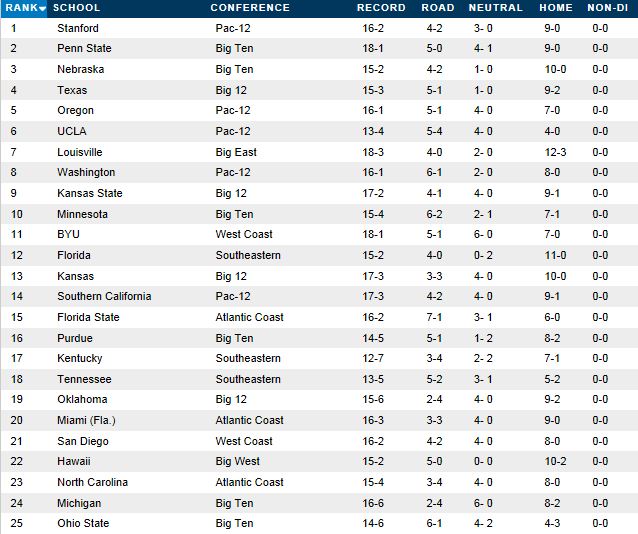