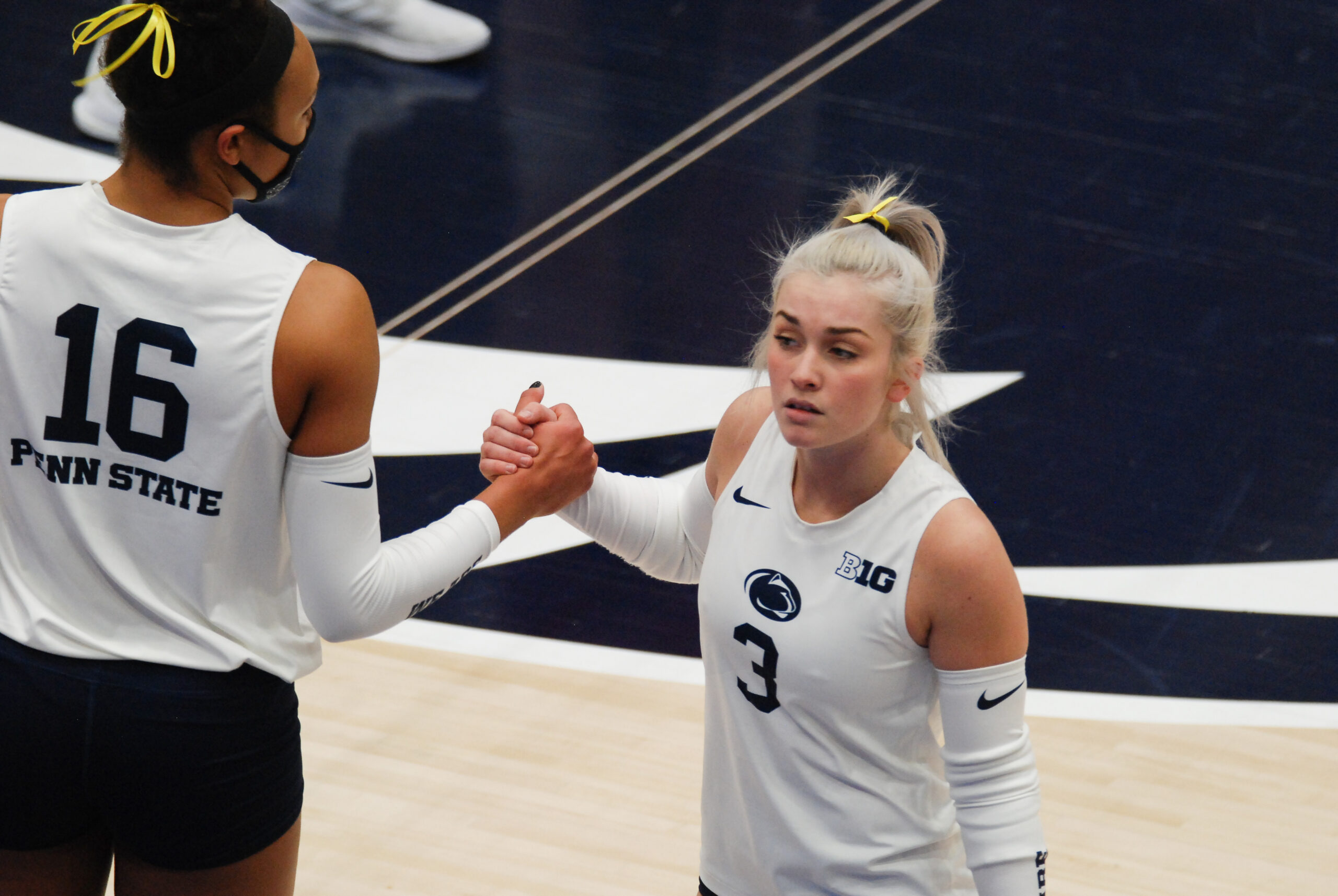 Penn State women’s volleyball defensive specialist Keatan Broughton met with the media Wednesday evening on Zoom ahead of a huge home series against No. 1 Wisconsin this weekend at Rec Hall.

The junior from Charleston, West Virginia, transferred to Penn State this offseason after spending her first two collegiate seasons playing for her home-state Mountaineers. Broughton made a tremendous play in Penn State’s sweep of Michigan State last Saturday, running full speed into a table to keep the ball alive.

Q: I’m curious what it’s been like joining the Penn State program and learning the ropes from Jenna Hampton?

“She’s an amazing player and covers ground really well, communicates with everybody, so I just really respect her as a player and definitely learned from her — reading the plays and serve-receive, being stopped before the ball is served. She has a lot to offer us learning from her.”

Q: How were you introduced to volleyball?

“It was about 10 years ago. My sixth grade in middle school, I had the option to play volleyball or cheerleading. One of my best friends played volleyball, so I just started playing with her and fell in love with the sport.”

Q: Penn State’s going to close out the regular season with two big series against Wisconsin and Nebraska. What do you think is the biggest challenge ending the season with such high stakes?

“I think we’re going to learn a lot from these next two games. Obviously, the serves are going to be harder, the hits are going to be harder and faster, the sets, everything. They’re both really good teams. I think what we’re focusing on right now is just winning, because we know, us as a team, we know how to play. We’re just confident in ourselves to hopefully get this win.”

Q: What did you like most about Penn State when you were deciding where to transfer?

“I honestly had two major things that made me decide Penn State. It was definitely the academics and also the volleyball program itself. At West Virginia, they did not have an architecture program, and I was looking for a school with an architecture program. I got the opportunity to study some architecture here and thankfully I’m starting grad school in the fall. I think I made a lot of connections that helped me through the academics and also talking about volleyball. The team’s really committed to winning. They’re very honest and open, and I just love that about my teammates.”

Q: What’s one way that you think you’ve stepped up your game this season entering such a big program?

“I would have to say communication. I’m a very vocal person, but I would say the things that I’ve been saying are better for the team. As a freshman and sophomore, I would be yelling out random stuff, just because you’re supposed to be talking in volleyball, but I’m actually telling the hitters where to hit and I’m telling people where to play defense and trying to just help all my teammates be in the right position. I have the experience, so hopefully they trust me to tell them that.”

Q: What’s your relationship like with Sophie Walls and Hannah Flowers?

“Oh, it’s great. They’re actually my roommates, so they’re like sisters to me. Not so much right now because season is going on, but in the offseason we get to hang out all the time, play volleyball in the backyard. It’s a great atmosphere at my house, I would have to say.”

Q: Moving forward, what’s one part of the game that you want to add to your repertoire or get a lot better at?

“Definitely serve-receive. That’s a really easy answer. I work on serve-receive every single day. I just want to become really consistent in it.”

Q: What’s the team’s reaction when you get all of your new gear for the season?

“We’re really excited. It’s great to have new gear. I don’t know if you consider it free, because you have to practice for it and play hard for it, but yeah, we get really excited when we get gear. Sometimes, we’ll get a jacket if something goes well. It’s great. It’s awesome.”

Q: How many times do you think you’ve heard the song “Country Roads” by John Denver in your lifetime?

“Well, considering I’m born and raised from West Virginia, a lot of times. Before I even went to West Virginia University, I’ve heard ‘Country Roads.’ It was like a lullaby to me when I was little. I’ve heard it so many times.”