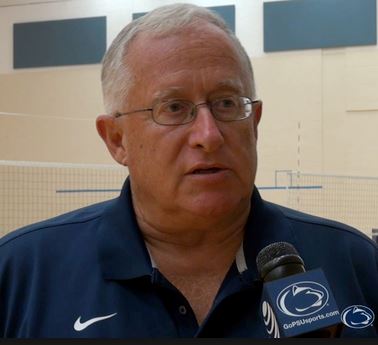 A Conversation with Russ Rose – Part I: The Difference Between Excellence and Success 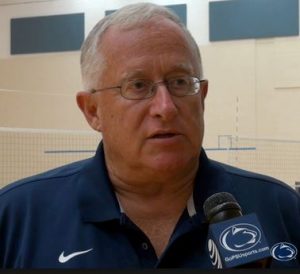 On June 17, 2016 we sat down with Coach Russ Rose, Head Coach of the Penn State Women’s Volleyball team since 1979, for a conversation about coaches and coaching, centering on three books: “When Pride Still Mattered: A Life of Vince Lombardi,” by David Maraniss, “Wooden on Leadership,” by John Wooden and Steve Jamison, and “Geno: In Pursuit of Perfection,” by Geno Auriemma with Jackie MacMullan.

We divided the interview into five parts: I. The Difference Between Excellence and Success; II.  How Do You Get to Carnegie (or Rec) Hall? III. The Cowboy’s Uncertainty Principle; IV. Getting (and Staying) On Top; and V. Fame.

It’s a long article, so we’ve decided to repost it in four segments (combining Parts IV and V into one post — fame is fleeting, so Part V is short).

Here’s Part I.  We hope you enjoy reading the interview as much as we enjoyed our conversation with Coach Rose.

Tom Boswell, the great Washington Post columnist, wrote about the difference between excellence and success, in a February 6, 1986 column in the Washington Post:

Many people, particularly in sports, believe that success and excellence are the same.  They’re not. . .. Success is tricky, perishable and often outside our control.  Excellence is dependable, lasting, and largely an issue within our control; pursuit of excellence, in and for itself, is the best of foundations. . .. Success can burn up the person who achieves it.  Excellence usually feeds whoever has it. . ..

Contrary to his reputation (“Winning isn’t everything, it’s the only thing” – a line that actually was first uttered in a 1930s movie, by an 11-year old actress), the difference between excellence and winning was important to Vince Lombardi:

Carroll Dale, a receiver who came to the Packers in 1965 from Los Angeles, said that it was “human nature, when you win, to overlook mistakes.” But Lombardi was different. “He would not overlook them. He would correct them, immediately. Winning wasn’t everything for him, he wanted excellence. There’s a difference.” When Pride Still Mattered, pg. 366-367 ebook.

John Wooden put it in slightly different terms, differentiating between winning and success, which he defined as “peace of mind which is a direct result of self-satisfaction in knowing you did the best of which you are capable.”  He wrote:

I do not judge success based on championships; rather, I judge it on how close we came to realizing our potential.  Wooden on Leadership, pg. 31 ebook.

DigNittany: What are your thoughts on the difference between “excellence” and “success”?

Coach Rose: From my standpoint, you have your team’s attention much more following a loss than you do coming off a victory.  Players think “Why would my coach be concerned about performance?” when he or she is also referencing the importance of results.

Whether it’s pro sports, or college sports, or scholastic sports, there might be a process or a developmental phase when you’re going from point “A” to point “B,” where you can’t just say “Oh yeah, I just got the job.  We’re going to win the State Championship!”  Wooden’s early record wasn’t great (it wasn’t worthy of the acclaim he received later in his career).  He actually wanted to return to the Midwest, as his wife didn’t really enjoy the West Coast – but the AD reminded him that it was he, Wooden, who wanted the three-year contract.

There’s a story in John Feinstein’s new book ”The Legends Club” – a very good book about North Carolina’s Dean Smith, Duke’s Mike Krzyzewski, and North Carolina State’s Jim Valvano – that Krzyzewski, who was coming off a tough season, thought he was potentially getting fired. Instead, when he went to the Athletic Director’s office, the AD gave him an extension and a raise.  The best thing for Krzyzewski at that time was that the other two teams from Tobacco Road were playing in Regionals on the other side of the country, so all the media was covering them, and nobody was back home writing “Fire Coach Krzyzewski.”

So when we’re talking about excellence and success, “excellence” might be the goal we’re trying to achieve – we’re trying to clean up our ability to play the game at the highest level we possibly can.  “Success” might be a perception or a feeling at the conclusion of a practice, an event, or a season, where the kids feel “successful” – maybe not because they performed at a certain level, but because the goal was to get through the practice, or the preseason.  I’ve heard players say that getting through preseason is the goal.  And I’m saying to myself “No one has ever died in our preseason.  Why would that be what you’re latching onto?”  Whereas, when you talk about Lombardi’s preseason, and Bill Parcells’, the players would say it was significantly harder than the games.

You want to know “Can my team compete at the highest level?”  And in some cases, you can find that out by how hard they go right out of the gate.  In some cases, you’re just never going to know.  You can go slowly, and you can keep on waiting, and waiting, and say “I’m going to build, I’m going to keep building this great foundation,” and then the season ends and you never really know.  What was their tipping point, and could I have gotten to the tipping point earlier to know “This is a team that although they stumbled here, they have the potential to be great somewhere else?”

My big reading focus now is Muhammad Ali, because he just passed.  One of his interesting quotes was “A man who views the world the same at fifty as he did at twenty has wasted thirty years of his life.”

So in coaching, it’s the same thing, whether we’re talking about pro coaches or college coaches, you have to look at your situation.

Are you at the end of a contract as a coach?  If you are, then you might be more concerned about not rocking the boat.  You might want to have a successful season, and define success as the players being happy, and the players and their parents not wanting to have you fired.

Whereas the administration might say to you “We’re paying you an awful lot of money, and frankly, we’re not comfortable with the results we’re getting.  So we’re going to go in a different direction, and we’re going to pay you the balance of your salary.”

Or they might say “We want you to make a change in your staff,” which is what some schools do in football or basketball situations.  Now in my mind, if the staff has been loyal, and the coach doesn’t think they’re the problem, a coach with backbone and loyalty and principles would say “No way.  If they go, I go.”

So when I look at excellence and success, it’s tricky.  If I have two different players sitting in two different chairs, it may be that both of them have the chance to be successful players, but only one of them has the potential to be an excellent player.  Maybe the physical attributes of one don’t allow them to be an excellent player, but that player will find other ways to be helpful to the team.

Thursday night in game six of the NBA Finals, a guy who the Cavaliers picked up for a minimum contract seemed to be one of the key players for Cleveland.  It’s not as though Cleveland just found him on the street somewhere and said “We need a guy who cares.”  They all care.  But here was a guy who had experience, and when given an opportunity, he was ready to do his thing.

When you’re talking to players, so many times they’re not ready to perform like that.  Coaches can talk to them; they can print quotes and put them on their walls or hand them out to their players.  I’m not thinking quotes are winning games.

DigNittany: In a recent interview, when asked what was the one trait he thought was most important in a young player, Ron Hextall, the General Manager of the Philadelphia Flyers, said if he had to choose one word, it would be “will.”  Your thoughts?

Coach Rose:  You can win some matches with “will” over “skill,” but I don’t know that you can win that way throughout a whole season.  I just read a book “Grit: The Power of Passion and Perseverance,” by Angela Duckworth. Terrific read. She did a really good job breaking it down.

I think there’s a lot of ways to measure excellence and success. If we’re just looking at the results, and we’re looking at the outcome events, that’s one of the ways one can keep score.  It’s not the only way.  One might say “I’m developing character.  And it was a successful year because my players bonded and we made great progress.”  And that’s terrific, unless the expectation is for you to win the championship.

[Editor’s Note: Duckworth’s TED talk (see below) has been viewed 8,670,000 times. The New York Times wrote that if “Grit: The Power of Passion and Perseverance,” were a Power Point presentation, “the best slide would be the two equations that offer a simple proof for why grit trumps talent: Talent × effort = skill. Skill × effort = achievement. In other words, “Effort counts twice.”]

(For Part II of the interview with Coach Rose — “How Do You Get to Carnegie (or Rec) Hall?” —  Click Here. For the complete interview, Click Here.)