A Conversation with Russ Rose Part II:  How Do You Get to Carnegie (or Rec) Hall? 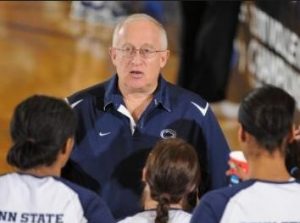 On June 17, 2016 we sat down with Coach Russ Rose, Head Coach of the Penn State Women’s Volleyball team since 1979, for a conversation about coaches and coaching, centering on three books: “When Pride Still Mattered: A Life of Vince Lombardi,” by David Maraniss, “Wooden on Leadership,” by John Wooden and Steve Jamison, and “Geno: In Pursuit of Perfection,” by Geno Auriemma with Jackie MacMullan.

We divided the interview into five parts: I. The Difference Between Excellence and Success; II.  How Do You Get to Carnegie (or Rec) Hall? III. The Cowboy’s Uncertainty Principle; IV. Getting (and Staying) On Top; and V. Fame.

It’s a long article, so we decided to repost in four segments (combining Parts IV and V into one post — fame is fleeting, so Part V is short.)  Here’s Part II.

We hope you enjoy reading the interview as much as we enjoyed our conversation with Coach Rose.

The conductor of the New York Philharmonic was racing up New York’s Seventh Avenue to a rehearsal, when a stranger stopped him. “Pardon me,” he said, “can you tell me how to get to Carnegie Hall?” “Yes,” answered the conductor. “Practice! Practice!”

Minor details – like pennies – add up.  A good banker isn’t careless with pennies; a good leader isn’t sloppy about details. . ..  Just as there is a correct way to tie your sneakers, there is a correct way of executing virtually everything in the game of basketball.  Wooden on Leadership, pg. 155; 161 ebook.

DigNittany: John Wooden was a stickler for detail (today’s world might call him a fanatic).  He said there was a correct way to do everything in basketball, and he went so far as to start his season practices with an explanation on how to put on your socks and tie your sneakers.  He also was known for not showing emotion — a commentator once said “Wooden just raised an eyebrow; he must be really upset.”  But the first two building blocks of his “pyramid of success” were “industriousness” and “enthusiasm.”

Lombardi believed that “doing the same thing over and over again, whether it was a play or a calisthenic,” would make his players “fearless and instinctive.”  But “passion” was also part of his trinity of football success.

Your thoughts on practice, Lombardi’s passion, Wooden’s details, and “building blocks” for excellence?

Coach Rose: Well, Wooden was doing that back then.  You wonder if he would do that now. Thinking about repetition, in Outliers, Malcolm Gladwell talks about the 10,000-hour rule.  But in college athletics, you can’t make 10,000 hours on 20 hours per week.

Some coaches are 100 percent about technique.  I would be more along the lines of “I want the players to compete.”  I want to see competitive behavior and I want to see group cohesion behavior, instead of saying technique training is the most important thing or only thing.  Again, I think there are a lot of ways to practice, prepare, and compete.

DigNittany: By “group cohesion” do you mean the players have an on-court awareness of each other and what each player is doing?

Coach Rose: Part of group cohesion is that they monitor each other.  Every team – whether it’s the Golden State Warriors, where maybe one or two of their players are more likely to get in trouble and get thrown out of games, or a football team, or a college basketball team – has players that for one reason or another need monitoring.

For example, if I were to ask my players to list which three players are most likely to forget their shoes, forget their uniform, or sleep through practice, and everyone lists the same three players, then the players know.  I’m not going to take it out on those three players because they’re absent-minded or forgetful, because everyone else on the team knows those players are like that.  They should help monitor those people.  It shouldn’t be the coach punishing them for forgetting, because we all know they’re going to forget.  It’s the other players who should be reminding them, or addressing whatever the issue is.

DigNittany: One thing that stood out in the Lombardi book was that he concluded early on that he had to pace his coaching to the level of the slowest learning player.  Has your experience been similar coaching volleyball?

Coach Rose: My thought is that if you have to tell someone the same thing a number of times, at some point in time, they will convince me that they’re not going to be able to do it.  Then, I’m better off finding another person to talk to, because you can’t keep on telling a player the same thing, and have them keep on failing.  Maybe they don’t understand, maybe they’re afraid – I don’t know what the answer is – but I know that for me, I’d rather tell the same thing to a new face, than the same thing to the same face, over and over again.

Now, how do we translate that to volleyball?  Repetition for volleyball has to be with an awareness of error control.  The teams that are winning the most are making the least amount of errors.  The question is, are they making the least amount of errors because their system is simplified, and they’re not caught up on the flavor-of-the-month, or because they’re doing things the way the National team did them, or the way whoever wins the Gold Medal this summer did them?  Or is it because their players are seniors or they have veteran players?  Or is it because their coaches have the best handle on controlling their team?

DigNittany: What is an example of a coach being able to control their team?

Coach Rose: When a coach has control of their team, the coach talks to the group and the group listens collectively.  A coach that is in control of his or her team can say to the setter “Stop setting player X because she’s making a lot of mistakes.  I know she’s your best hitter, but she’s also the other team’s leading scorer right now, because she’s having a difficult day.  I’m not taking her out, because we need her for passing, blocking, defensive reasons. But it would be helpful if you didn’t set her at the level you’re accustomed to setting her, because it’s not working today.”

Because that coach has control of their team, that one-day adjustment won’t adversely impact the setter, or the hitter, or the rest of the team, the next day.  Whereas if a coach who doesn’t have control says that, the hitter goes home and says “The coach said never to set me again.”

DigNittany: So what are your thoughts about “building blocks” for excellence?

Coach Rose: I think detail matters, but if we have three different but successful coaches, one’s approach to detail could be that technique has to be perfect, the second one might believe that concentration and visualization are the most important things, and the third coach might say it’s all about communication and collective effort.

DigNittany: Coach Auriemma says in his book that he’s noticed that the top programs in sports, like the Carolina basketball teams, are “uniform across the board.”  So there are no names on the back of the uniforms, all the players wear socks that are all the same length. He says he doesn’t want players to express themselves individually, other than on the court.

Coach Rose: We practice in matching uniforms, but it is facilitated by a corporate sponsorship and I like the look of practice.  But I was struck by something watching the men’s volleyball Final Four this year, which Penn State hosted.  I’m watching the teams practice.  You’re supposed to wear matching uniforms.  I’m watching one of the teams and they had five different shirts on – short sleeve, tank tops, long sleeve, different colors.  And in the men’s game, the coaches would say “Who cares?”  For the women’s NCAA tournament, there are a lot of rules about what you can and can’t do.

For me, it’s still about the players.  I don’t care if a player wears a short sleeve or a long sleeve shirt; I care that she’s ready to play.  I’m a lot looser in my practice, although I don’t prefer it if the older players are wearing shirts from previous seasons, and the newer kids don’t have those shirts.

I had a player go to a USA team, and she went to a practice, and she hadn’t been given the right practice jersey because the equipment people didn’t have enough of the matching jerseys.  The coach made her run at the start of every practice, assuming she was being difficult.  But if they had asked her “Why don’t you have the right jersey?” the answer would have been “This is what they gave me.”  But she was tough and she was a great Penn Stater, and so she thought “OK, I’ll run.  That’s fine.”

So what are these specific building blocks for excellence?  You have to have good fundamentals.  I think you have to have a good culture – which is interesting, because what was the culture of the Green Bay Packers?  Some would say it was about that great line about Lombardi by the late Henry Jordan, ”He treats us all the same — like dogs.”

DigNittany: Though Jerry Kramer has written that Lombardi’s genius was that he treated all the players differently.

Coach Rose: Some of them, they loved him.  There were some who didn’t like him, and there were some guys, like Jerry Kramer, who were going to sneak out every night anyway.

So our culture is that everybody is different, just like all Lombardi’s “dogs” were different.  If anybody’s worked with horses, all the horses are different.

DigNittany: So that’s part of what you mean when you say that it’s really important to you, as a coach, to develop “character in characters”?

Coach Rose: I want coaching to be enjoyable for me.  The players have a luxury of being in a pack.  I’m not in the pack.  So I have 22 one-on-one relationships.  I still am responsible for the team and certain behaviors, but I don’t talk to them all the same way.  When Lima [Associate Head Coach Salima Rockwell] played, I talked to Lima almost exclusively, because she was so enjoyable for me to talk to.

Some players over the years I chose to limit our interaction because I found it to be a wasted effort.  Sometimes I’ll assign someone else to talk to them – not because I think they’ll have a better chance of reaching them.  It’s because I’ve already moved on from the fact that the person doesn’t listen.  In pro sports, they just get rid of that player.

So everybody has a different culture.  For us, some years it’s better than others.  Some years it monitors itself, and some years it’s almost as if you never had one.  Your job is to make things better, but you may not be able fix what needs to be fixed.