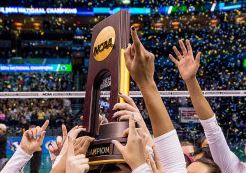 Below is our updated table, showing the W-L records (matches and sets) for the Final Four teams in the NCAA Tournament 1998 through 2017.  Depending on your point of view, Penn State fans might take some solace from the fact that this year’s team won more matches (33) and lost fewer sets (22) than any of the other Final Four teams.  That doesn’t change the fact that they lost their last match, but it does highlight what a great season they had.   And Penn State fans can take pride at the Nittany Lions’ very impressive records during the 2007 to 2010 period, coming close to perfection in 2008, with a 38-0 record and dropping only two sets all season (those two coming in the classic NCAA Semifinal match against Nebraska in Omaha), en route to winning a second consecutive NCAA Division 1 Women’s Volleyball National Championship. The 2009 Penn State team extended the Nittany Lions’ streak of consecutive sets without a loss to 141, before losing a set to Iowa at Rec Hall on October 2, 2009.

But you don’t need us to compare the statistics — you can do that for yourself by taking a look at the table below, which lists the records of all the NCAA Women’s Volleyball Final Four teams from 1998 on — total wins, total losses, sets won, and sets lost. If you click on a team’s logo, it should take you straight to the team’s website. (Let us know if a link is broken)