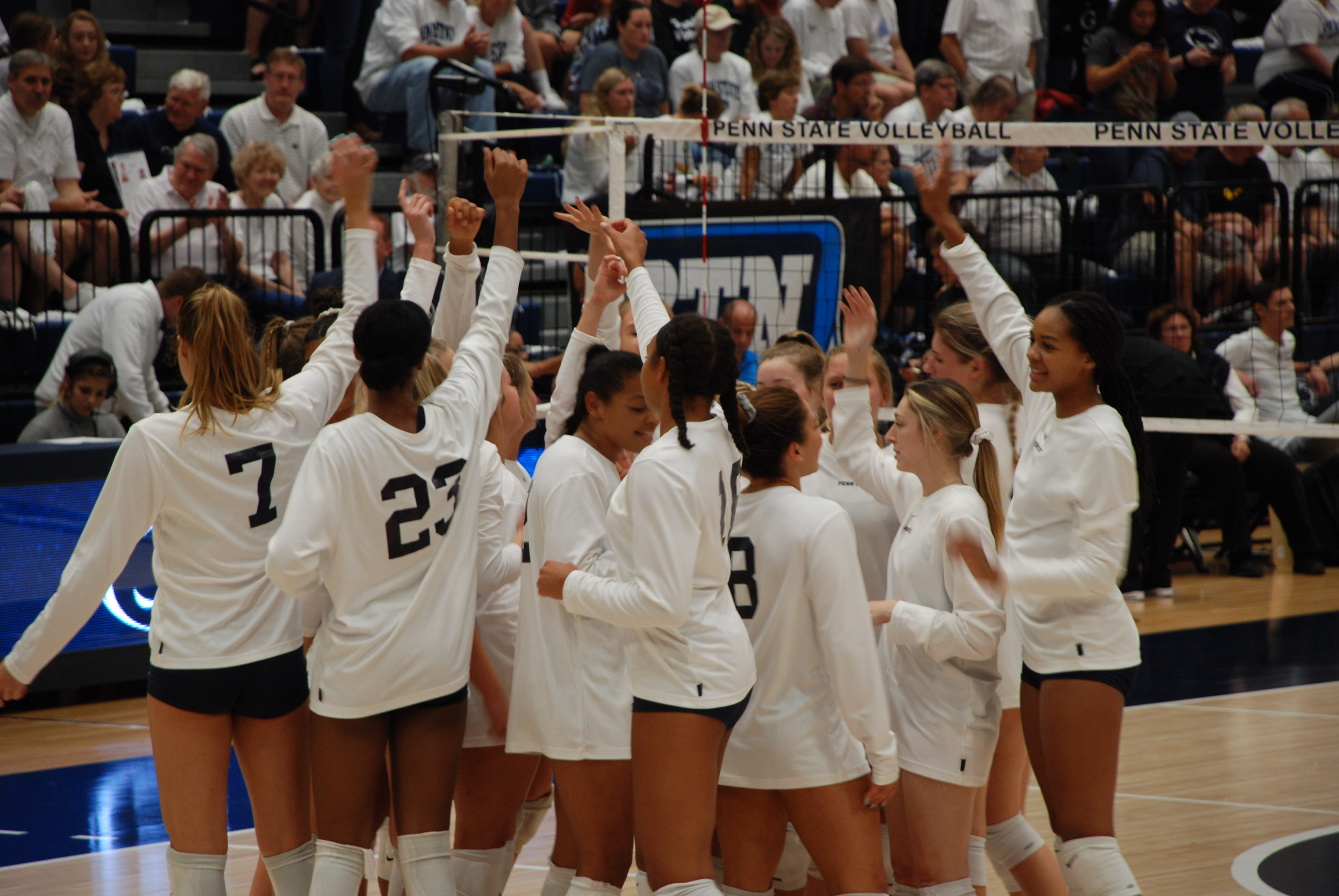 The fourth-ranked Nittany Lions have a home-and-home scheduled with No. 6 Pitt this weekend, welcoming the Panthers to Rec Hall Friday night before traveling to Petersen Events Center on Sunday afternoon to wrap up non-conference play.

“They won their conference the last two years in a row and they’ve got a number of veteran players, so what they do well is play well together. We’ve played them in the spring the last couple years. Not only have we played them in the NCAA tournament a couple of times, we’ve played them in the spring. We’ve had a chance to see them and know that they’re very good. It’s not surprising that they’ve taken their team to be a top five or six team in the country. They’re very good. They’re well-deserving of the recognition that they’re getting. The one middle, [Layne Van Buskirk], played for Team Canada this summer. They’ve got a couple of senior outside hitters. [Nika Markovic] from Slovenia is a very accomplished outside player [as well as] the outside hitter from California, [Kayla Lund]. The middle from Houston, Texas, Chinaza Ndee, is an exceptional player. I know they’re very good. They beat Ohio State earlier in the year, 3-0. They just beat Pepperdine at Pepperdine. They beat Utah, which was ranked in the top 15 earlier in the year. Next to Stanford, Pitt’s the best team we’ll have played to date. Whether you’re playing the same team twice or playing two really good teams, you need to be ready to play well all the time, and it has nothing to do with whether your team is ranked or not. Just playing good teams forces you to up the level of play, and if you don’t come ready to play, you’re going to get beat — just based on the fact that everybody else is playing well. The other teams are very well-accomplished as well.”

“I thought we competed pretty hard in the Friday night match [against Stanford]. I don’t think we had a great effort from everybody, but I thought we had some really great individual efforts. I thought Kaitlyn was exceptional against Stanford. I thought Gabby [Blossom] and Kendall [White] played really hard. I thought a couple of the other people really struggled. It was a hard match, it was an emotional match, and I thought both teams weren’t as sharp the next day. Minnesota was able to beat Stanford the next day playing their game and we had to battle against Oregon. Oregon is a very good team, but they were minus two or three of their key players, which made it a little harder for them to play at the level that I’m sure they’re going to be playing at once those kids come back. They were playing some younger players, but those kids are also very good. Injuries are part of the game whether they happen early or they happen late. You can only play with the kids who are cleared to play. We’ve got some kids who aren’t at full strength, so I know how that is. I was glad that we were able to come back. The second game against Oregon could have gone either way, for sure. The first three games with Stanford were deuce games, but I’m not naive to think that on a neutral court, or playing at Stanford, that maybe we wouldn’t have had the same opportunities that we had here with 6,000 people providing us with a great home-court advantage, but that’s the benefit of playing at home. Everybody has that, so we’ll have that on Friday and Pitt will have it on Sunday.”

“We’ve done similar things in alternate years with teams. We did it a long time ago with Texas. I’m sure other teams have the ability to do it. It’s the first time we’ve done it with Pitt. We’ve had years where we would play Pitt at home and play Pitt on the road, but not on the same weekend. We’ve had conference matchups where we’ve played Rutgers twice in the same week or Ohio State in the same week, but it’s the first time we’ve done it with Pittsburgh. Again, I think it’s really important to play good teams. I’m from Chicago, so I’m not a part of the Pitt-Penn State thing. Although I’ve been here for 41 years, I’m not a card-carrying member that’s caught up in some of the nonsense that I’ve heard over the years that I’ve been here. I guess if you grow up in Pennsylvania, you have an allegiance to one of the schools and you want to voice your opinion on things.”

“I thought Macall was a little nervous when she came in, but I thought she steadied out real well. I thought she dug a couple balls and looked good against Stanford. I thought Lauren came in and she looked comfortable considering I’m sure she was pretty nervous as well. We need a couple of kids on the bench to be ready to come in and contribute if some of the people on the floor aren’t playing up to the level that we need them to play at.”

Coach Rose on traveling with a young team:

“It’s just part of a sporting environment. There are some years where I think the team performs better when they travel, because they don’t have any of the distractions that they have when they’re at home, when they have to worry about getting tickets [for family] and worrying about who’s in the crowd and what issues they have to be balancing at home. Every team is different. We’ve only had the two weekends at home and the one weekend on the road, so it’s a little early for me to really put a judgment on how this group handles the challenges of traveling. The Big Ten season will more than give us an indication of how these guys can handle the conference, because the crowd that we had on Friday night, we’ll see that on multiple nights on the road. The younger kids will really get a taste of how it is to be the visiting team.”

Kaitlyn Hord on the atmosphere against Stanford:

“Friday night was insane. I think that’s one of the biggest crowds I’ve ever played in front of. It’s always an honor just to step on the court in Rec Hall with all the fans and boosters who come out to support us. It was just unreal. Something you won’t forget for sure.”

Kaitlyn Hord on the positive takeaways from last weekend:

“I think we learned that we all have a lot of fight in us. In the second set, we were behind I don’t know how many points, but we were able to rally back and we just had that grit in us. It’s kind of the feeling that we won’t stop until we get where we want to be. I think I learned that our team is a group of people who will fight for just about anything.”

“I think the thing she’s improved the most is her vision on the court. Last year, a lot of us, because we were young, we just kind of hit the ball just to hit the ball. Now, she’s mixing up her shots and she’s incorporating tips. She’s hitting different shots, not just swinging one way or the other, but actually seeing where it’s open on the court and going for it.”

Kaitlyn Hord on what Lauren Clark does well:

Kaitlyn Hord on what stands out to her about Pitt:

“Gabby is a playmaker. She loves to incorporate middles, which I love because I’m a middle. She works really hard, like Coach [Rose] always says. There’s never a day when she’s not going to give 100 percent. She’s also the type of player who you just want to work hard for, because she’s always giving her 100 percent.”

Kaitlyn Hord on what she needs to work on:

“I’d like to work on my blocking and always being disciplined with my blocks. Also closing the block and hitting hard consistently. That would be awesome.”

Lauren Clark on her experience Friday night in Rec Hall:

“It was really cool. That was my first time, obviously, playing such a big team in the gym, so it was really cool to see the support that we got. It was just a really great atmosphere with the band there and such a large student section and the fans in general.”

Lauren Clark on why she chose Penn State:

“I was just really intrigued with how hard they work here. I wanted to be a part of a program that would win a national championship and leave a legacy.”

Lauren Clark on Coach Rose’s best advice to her:

“Probably just to stay emotionally sound and work to get better every day.”

Lauren Clark on how the older players have helped her adjust:

Lauren Clark on her best skill and what she needs to improve:

“I would say probably my best skill is hitting. Something I need to work on, for sure, is passing and digging. It’s not my strongest, but I’m working on it.”

Macall Peed on why she chose Penn State:

“Obviously Coach Rose and the legendary program that was built before me. Just the competitive atmosphere that comes with it. The crowds are insane. I haven’t seen a volleyball program that gets that big of crowds every game.”

Macall Peed on where she’s improved and what she needs to work on:

“I would say my defense has gotten a lot better, just adjusting to the speed of the game since it’s a whole different level. Something I need to get better at is serving — serving tougher.”

Macall Peed on how the older players have helped her:

“Just going through the motions and everything. On game days, how we get ready and how we prepare is obviously different than any high school match or anything like that.”

Macall Peed on a volleyball player she admired growing up: