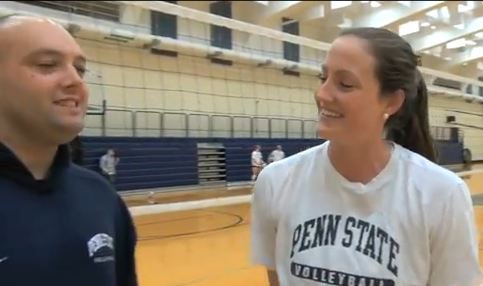 It’s the first Big Ten road trip this season for the Nittany Lions with two story lines emerging: Can Penn State play well on the road against a top flight opponent, and will the players understand that both Wisconsin and Minnesota fit that description?  Here are three quotes we liked about this weekend’s matches:

It’s going to be interesting how we react, and how we play together, and how we just come together.  I’m actually excited, because I think this team really feeds off of energy, and sometimes we’re not the best at getting our own, like getting going, but when it’s there, we’re in the game.

Micha Hancock in interview with Aaron Donlevy of The Daily Collegian

I think the away tournaments that we had earlier this year really helped. I like playing in crowds, whether it’s home or away, they don’t bother me. I don’t think it’s a problem.

Megan Courtney in interview with Matt Bufano of The Daily Collegian.

All of the games have the same value, so to pretend like I’m talking about Minnesota instead of Wisconsin would be so opposite of the way I roll.

Q & A with Steve Aird

In another in a series of interviews by Penn State players with Penn State coaches or other players, 6-2 Jr. OH Maddie Martin and 6-1 Jr. OH Deja McClendon interviewed Penn State Assistant Coach Steve Aird. It’s worth a look — particularly if you’ve ever wondered what the coaches are saying to the players when they get up off the bench and talk to them from the sidelines.  Very nice job Maddie and Deja!