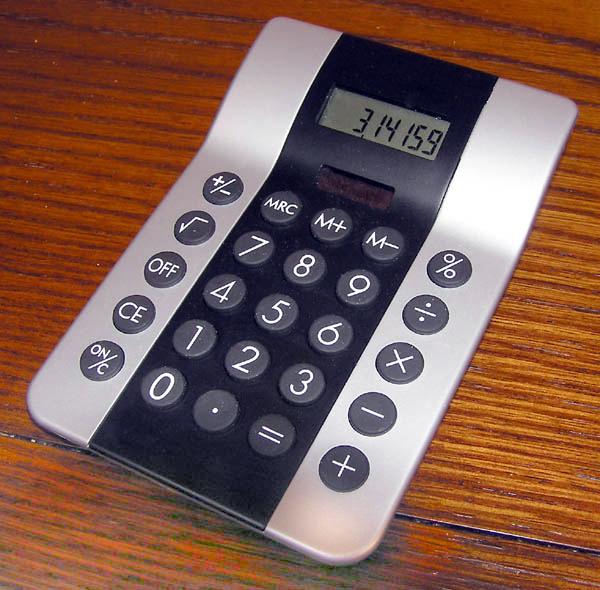 For  volleyball coaches and players this is pretty basic stuff.  Mr. Burton, for example — who served as an assistant coach for the Morgan State University women’s team, and for the men’s team at UC San Diego, and who earned M.S. (1997) and Ph.D. (2003) degrees in mechanical engineering from Stanford University — has published and lectured on the topic, including his article in the August/September 2009 issue of the AVCA’s Coaching Volleyball: “A Comprehensive Statistics System For Volleyball Match Analysis.”

But for fans who have never coached or played the sport, it’s a topic that may be worth further examination.  8M, a member of the DigNittanyVolleyball Forum, did just that, in recent posts , for Sideout Percentage and Year-by-Year Comparison of Selected Statistics for Penn State. 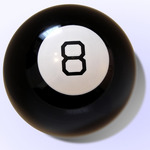 I have put together a spreadsheet of the sideout statistics for all the Penn State games this season [see below]. Unfortunately, this particular statistic is not provided on the NCAA website nor the PSU website; however, it’s a very important stat. If you win the sideout battle in a game/set, you win the game/set. Coach Rose mentioned in an interview earlier this year that his team is built on being able to sideout efficiently. Karch Kiraly mentioned that a good sideout percentage is somewhere around 65%, which Penn State has been achieving thus far in the season.

Four of the matches PSU played this year (highlighted) did not provide the sideout stats. The NWU and WI matches are the most significant of the missing matches.  However, because one was a loss and the other a win, I figure they cancel each other out. The other two missing matches (i.e., Notre Dame and E. Kentucky) were wins against weaker opponents, so the stats I’m providing are conservative, if anything.

[Editor’s note: as 8M said in his post, please let us know if you identify any errors] 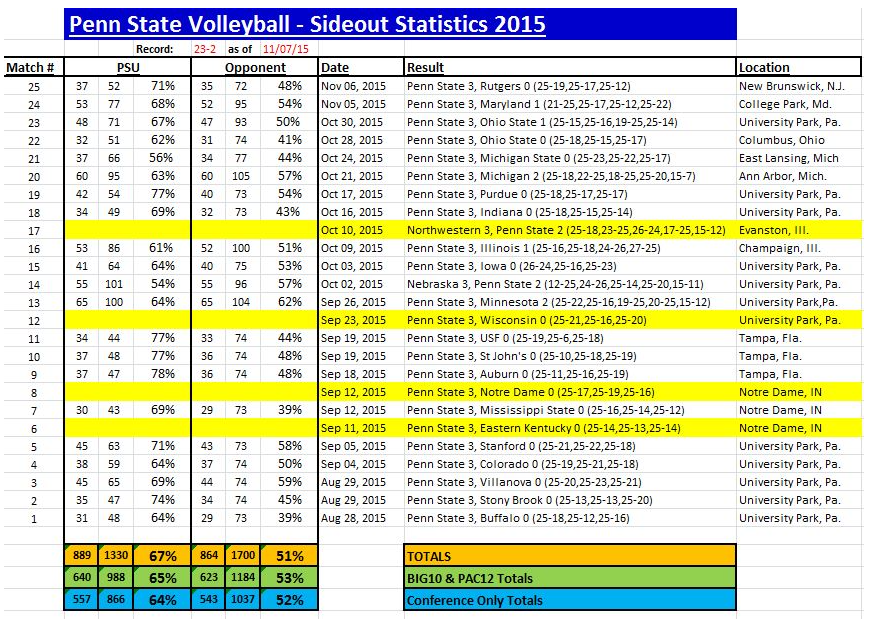 8M also put together a chart comparing selected categories of statistics for this year’s team to those of previous year national championship teams:

My reasoning is to have a better understanding of the current team’s strengths and weaknesses and a more realistic expectation of their performance in future games. I’ve included the differential (my main focus) for each statistical category between PSU and their opponents. This way I can get a better handle on how PSU’s offense AND defense are doing.

As you can see, this year’s team most closely resembles the 2010 national championship team, although the current team is a little behind in some categories, namely, the hitting % differential and the digs/set differential. The aces/set and blocking/set differential seem to wash out. The most concerning stat, however, is the serve reception % differential. It’s at a paltry .006 vs last year’s .056. The 2010 team was at .014, so not much better than this year. PSU’s serve receive is OK “on paper” but they need to serve tougher.

Here’s the spreadsheet [Editor’s note: as 8M said in his post, please let us know if you identify any errors] : 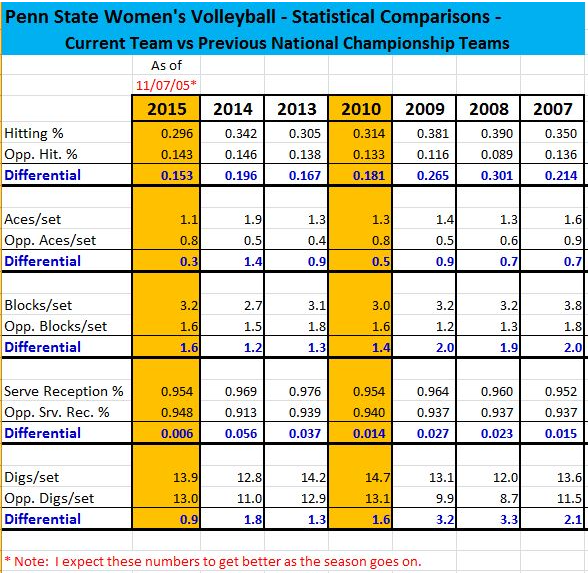 Here’s some of the commentary 8m’s posts elicited on the DigNittanyVolleyball Forum: