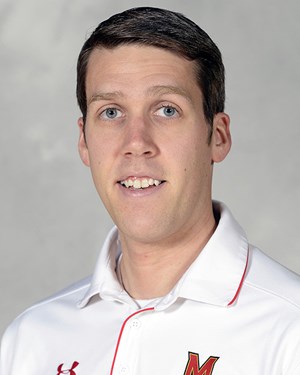 Adam Hughes, Head Coach of the Maryland Women’s Volleyball team, kindly sat down with us prior to the match between the Terrapins and Penn State on Saturday night.  Below is a transcript of that interview, lightly edited for length and clarity:

DigNittany:  You’re a Penn State graduate and started your career with Penn State.  Tell us how that came about.

Adam Hughes: I’m from State College and I played volleyball in high school.  At that time, Mike Schall [former Penn State assistant coach and current assistant coach at North Carolina] was the assistant coach for our high school team and his wife was our women’s head coach.  When I enrolled at Penn State, I was going to try to walk on to the men’s team.  Through the Schalls, I found out that there was an opportunity to be a practice player for the women’s team at Penn State (at the time, I didn’t even know what a practice player was).  Russ Rose convinced me that I would be better off as a practice player helping the team, than being the 20th guy on the men’s roster and never play.   So that got me in the door and then I fell in love with the sport.  Russ’s appreciation for numbers and statistics was a good scenario for me, because I see the game in a similar way —  I love numbers.  I started doing some video work and started helping Mike Schall a little bit more with some statistics, and the situation kind of grew and grew and grew.

Finally, when I was near the end of my senior year, I realized I had no idea what I realistically wanted to do.  So at the end of April, almost the first week of May of my senior year, I walked into Russ’s office and said “I have no idea what I want to do with my life.  I’m freaking out, all my friends have job opportunities.” And he said “what’s your favorite part of your day?” And at first I thought he was joking, and then I was kind of joking, but dead serious, and I said “Well, coming to volleyball every day, that’s what I love.” And he said “Well, why don’t you volunteer for me? If you treat it like a full-time job and you love it and you do well, I guarantee I can find you a job in this business.”  So I talked to my family and found a way to make a semester work after graduating.  That was 2007.  The team won the NCAA title and there was no going back.  After that, I knew I was gonna coach for the rest of my life.

DigNittany: Tell us about how you got the job as Penn State’s Director of Volleyball Operations.

Adam Hughes:  Steve Aird [current head coach of the Indiana women’s volleyball team] was Penn State’s director of opps at the time and I was a volunteer.  Steve left that job to take a job opportunity out west and coach a club team.  I went out for two years and coached club out in California, and then in 2010 the Penn State job [Director of Volleyball Operations] opened back up.  I was hired and I moved to Penn State.  I was in that job from 2010 through 2013.  Steve Aird came back to Penn State after Dennis [Hohenshelt] got the head coaching job at Virginia. When Steve took the head coaching job here at Maryland in 2014, I joined him as an assistant coach.  So we did a bit of a juggling act moving back and forth for awhile.

DigNittany: Russ Rose has been a mentor to you for a long time.  What has impressed you about Russ Rose as a coach?

Adam Hughes: It’s kind of funny.  He was at my wedding, and I always joke that he’s like a second dad to me, but I think I’m learning more and more about him now that I’m not even at the program.  I’ve always been impressed by his ability to be consistent, by how much he cares about his players.  You see it when you’re in it, but you understand it even more when you’re away from it.  Now that I’m on the other side, being a head coach, it’s unbelievable the success he’s had.

DigNittany: What you think is the single thing about him that has contributed most to that success?

Adam Hughes:  He always told me that he was never going to get outworked.  And I don’t think there’s anyone who ever will outwork him.  When I was a volunteer, I had this mentality that I had to be the first in the door and last out, and I tried to beat Russ in.  That was pretty challenging.  I’d be thinking I beat him to the office at 6:00 a.m. or 5:30 a.m., and then I’d realize he’d been emailing me since like 4 a.m. from his home office and I wasn’t really beating him at all.  Sometimes I didn’t understand why he was so hard on us on small details that seemed so mundane and not really that critical. But it was that he didn’t want anything to slip through the cracks. Russ obviously is an exceptional coach, but his ability to work as hard as he has and still does and be consistent in his approach is amazing.   I can see that now, and I’m stunned.

DigNittany:  You’re a dad now.  Has that changed where volleyball fits into your life?

Adam Hughes: Having kids and being a dad changes some things for sure, but it’s been great to have my two daughters and have them around college student-athletes.  I think it’s a tremendous thing for them and I love having my family around the [players on the team].  I do feel like [the players] are an extension of us.   So I feel very fortunate that I kind of fell into this. I’ve got Russ to thank — I don’t know if I would have found this profession or this calling if it wasn’t for him.  I’ve been so very very lucky.

DigNittany:  Thanks so much for taking the time to speak with us.  We really appreciate it.