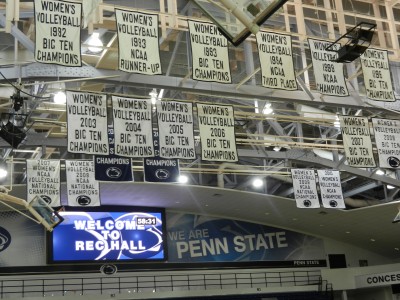 This is the third part of a four-part Season Preview of the 2014 Penn State Women’s Volleyball team.

Things undoubtedly will change. If something major comes to our attention (other than our slacker staff actually doing some work — which would be major, but of limited interest outside of DigNittanyVolleyball World Headquarters), we’ll endeavor to provide updates to these Previews.

Who's Back: Recept/Dig Leaders from 2013

Dominique Gonzalez, Lacey Fuller, Kendall Pierce, Lara Caraway, Laura Broerman and Carley Muller all return from the 2013 team. Joining them will be 5-9 RS Fr. transfer Skylar Dykstra and true Fr. 5-8 Lainy Pierce. It’s a solid and deep group, and competition for playing time will be intense.

Still to be determined is how the graduation of 6-1 OH Deja McClendon (2nd in digs/set and 5th in blocking in 2013), 6-4 RS/Opp Ariel Scott (tied for 2nd in blocking in 2013) and 6-6 MB Katie Slay (3rd in NCAA DI in blocks/set) will affect the defense. Those three (and their collective big-block) were integral parts of a defensive unit that allowed the fewest opponent aces/set of any Penn State team in the past 12 years. Take a look at the table below for the year-by-year averages:

As Head Coach Russ Rose said in the opening section, the staff and the 2014 team obviously have their work cut out for them. Here’s a quick look at the players who will be competing for back row playing time in 2014:

The Buzz on Dom: A team Captain in 2013, Dom is a calm and steadying presence on the court, with a superior first-touch on serve-receive. Passing is a strength and her defense is solid. Will be looking to build on a standout 2013 season, in which she led the team with 3.28 digs/set.

Here’s a video interview with Dominique from 2012:

The Buzz on Lacey: Plays fast, hard, with seeming disregard for life and limb. Competes all-out for every point. Passing and defense have improved each season.

2013 (Junior): Among the highlights from Lacey’s Junior season were:

Here’s an interview with Lacey from 2011:

The Buzz on Lara: A hard worker and competitor, Caraway will be looking to earn playing time as a serving specialist and defensive specialist.

Lara Caraway, a 5-4 DS from Evans City, PA, won four varsity letters for the Mars Area School District (she was homeschooled), and served as the team captain. She earned 2011 First Team All-State honors and was a first team All-WPIAL first team selection, recording 291 digs during the 2011 season.

2013 (Sophomore): Among the highlights from Lara’s Sophomore season were:

The Buzz on Kendall: Nearly tripled her playing time in 2013 (appearing in 83 sets compared to 29 in 2012),and will be looking to improve on that showing in 2014. Good teammate with a good volleyball IQ.

2013 (Sophomore): Among the highlights of Kendall’s Sophomore season were:

The Buzz on Laura: Another hardworking kid who brings good quickness, coverage and defense. Will be in the mix for playing time in 2014.

The Buzz on Carley: Brings experience, good passing and defense, and a nice feel for the game. Will compete for time as a defensive and serving specialist.

The Buzz on Taylor: Can set, pass, and defend. Will have the opportunity to compete for a variety of roles as the season progresses.

The Buzz on Skylar: Skylar has good skills and comes from a volleyball family. Her success will be based on her ability to get back into the gym and train.

High School: Started for four years at Redondo Union High School in Redondo Beach, California, where she earned First Team All-CIF honors, was named the 2012 California Gatorade POY, and was the #54 Prep Volleyball Senior Ace. Her father, Jerry Joe Dykstra, played basketball at Western Illinois, where he set an NCAA record for consecutive made free throws that stood for 19 years, was drafted by the Phoenix Suns and played professionally in Europe.
Here’s a video of Skylar from 2012:

The Buzz on Lainy: A player with lots of experience at various positions, who will be counted on to serve, pass and defend.

High School: Played on four New York State Championship teams, was the New York State Class C MVP in 2013 and 2012, a New York Gatorade Player of the Year finalist in 2012, and played for Niagara Frontier on WEVA Regional Championship teams from 2008 to 2013. Both Lainy’s parents were scholarship athletes at Penn State (her dad, Robert, Robert Pierce set the men’s volleyball team single-season service ace record with 47 aces, and held it until 2007, and her mom, Kiernan, ran the 800 meters for the women’s track team — anchoring the sprint medley to a 3:53.20 finish, which stands as the fifth-best in Penn State history).