November 14th was the first day for 2019 D1 women’s volleyball recruits to sign a National Letter of Intent with their school of choice. Three high school seniors — Lauren Clark, Sydney Ferguson, and Gabi Bailey — signed with Penn State. We spoke with Penn State Head Coach Russ Rose for his thoughts about these three players and how they may fit into the Penn State program in 2019.  Lauren Clark was the #31-ranked PrepVolleyball.com Senior Ace, which described her as “one of the hardest hitters in the country.” Here’s what Coach Rose had to say about Lauren:

Lauren is a really physical outside attacker, who has made a real strong commitment in the weight room. She’s not a huge high flyer — at camp she was at 10’3″ — which is still close to three feet above the net. I really think her strength is her physicality. She led her team to the State championship in Minnesota. Minnesota is one of the states where I think volleyball is played at a very competitive level.

Lauren has a good arm swing, she has a great work ethic, and she has shown great improvement this past year. She’ll be coming in mid-year, which is a good thing in this case, with both our outside hitters being done with their eligibility. She’s a good volleyball player, but someone who has worked really hard in the weight room to get stronger and I think her strength right now is that she’s stronger than a lot of her peers.

I think her game will get better as her volleyball IQ and comfort level playing the game improve. She’s not a true six-rotation player right now. She’s probably more of a front row player. Lauren is probably similar to Nia [Reed], except Nia is bigger and touches close to 10’10”.

Sports Jam Interview Prior to 2018 Under Armour Volleyball Match

According to multiple sources, Lauren Clark, a 6-1 OH who plays for Armstrong High School in Minnesota, has verbally committed to play for the Penn State Women’s Volleyball team, starting in the 2019 season.  Welcome Lauren! 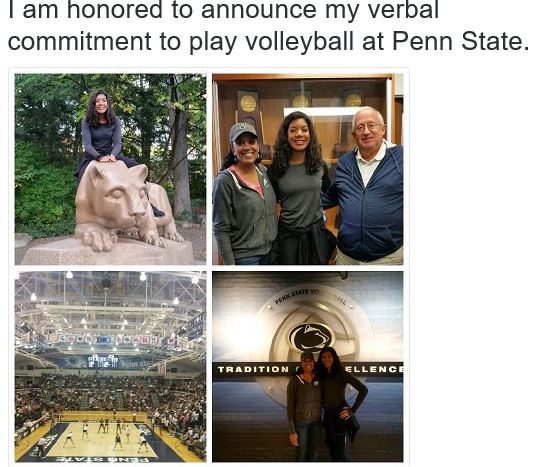 Here are excerpts from articles about Lauren from the 2016 season:

Clark, a 6-1 outside hitter, led the Falcons with 444 kills this season. She recently verbally committed to longtime Big Ten and national power Penn State.

A: My mom played volleyball and I’ve always been one of the tallest people my age. I was just drawn to it.

Q: What is your favorite part?

A: [Blocking] sounds a little mean, but shutting down another person, that kind of feels good.

Q: What is your top skill?

A: The last time I checked, I had a 32-inch vertical. I’ve trained really hard, but a lot of it comes naturally. A couple of times I’ve been hit in the face because I’ve jumped too high when I was blocking.

Lauren Clark has been a force to be reckoned with for the Armstrong High volleyball team since she first joined the program.  Clark amassed 236 kills last season and has been on a similar tear this season, recording 48 kills in her first three matches of the 2016 season.  “She’s a stud,” Cooper head volleyball coach Bryan Borgos said. “I know she’s getting recruited by some big schools already.  “She’s fun to play against and we wish we could have a girl like that, but that would make life as a coach a lot easier.”  Clark’s varsity volleyball career began during the 2014-15 season, her eighth-grade season, after she chose between volleyball and soccer.  “I had to pick between soccer and volleyball and I thought volleyball would benefit me better in the long run,” Clark said. “I really love the game and I wanted to play at a more competitive level.”

And a video of “Highlights from The Showcase in The Dells 2016”:

And here’s a video with an interview (short) with Lauren: