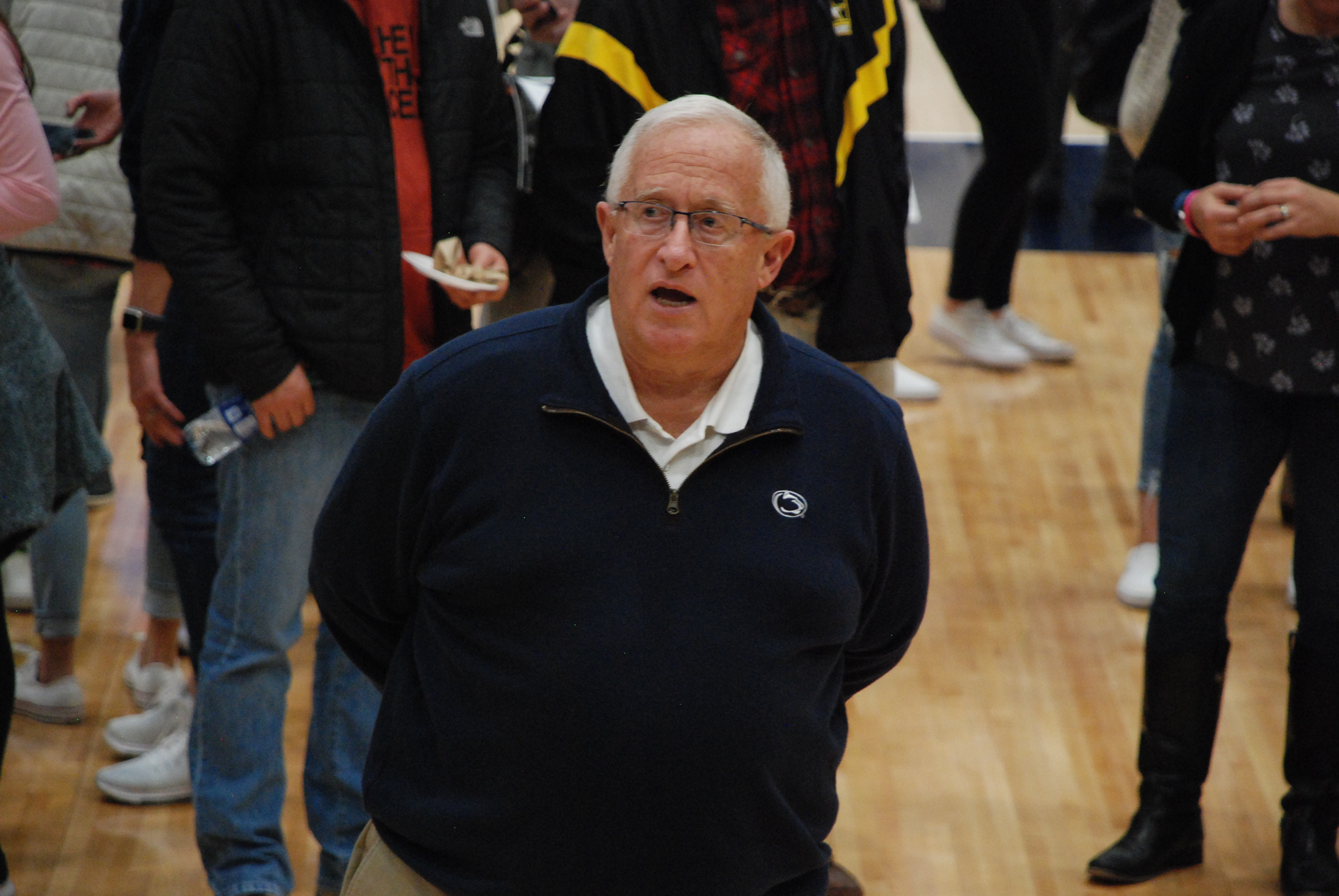 Rose discussed a host of topics ahead of his team’s weekend series against Illinois at Rec Hall. After seeing their first four matches postponed due to positive COVID-19 test results within the program, the Nittany Lions will hopefully finally take the court for their season opener this Friday against the Fighting Illini. Below, find the full transcript from Rose’s press conference.

Q: What can you tell us about the progress of your outside and right-side hitters?

“Jonni [Parker] continues to be the lone returning player out of those individuals, so she’ll continue to take some swings on both the left side and the right side. We’ll move other people around — as we did last year — just taking swings. We won’t have the same luxury that we had with Tori [Gorrell], who had the ability to hit off of one foot on the right side and be a veteran player taking big swings, but we’ll try and move some people around so that they’re not forced to carry a heavy load in a conference like the Big Ten.”

Q: As the team hopefully comes to the end of its program-wide pause, how do you hope to get the team back in shape to start competing again?

“It’s going to take time, for sure. When you’re coming off any sort of break, it takes a lot of time for the things that are based on timing — and certainly there are some motor patterns that are going to take the players some time to just get themselves back in the gym and working on those things, but I think that’s just something that you need to deal with. I’m sure the players are excited about the opportunity to get in the gym and have a chance to play, then they’re waiting a long time. I know that they’ll be enthusiastic and encouraged about their chance to do that. The expectations will be for them to do the best they can. As time progresses, we’ll get better. Normally, that would have happened in preseason. Since that didn’t really occur, we’ll just have to play and hope that we can make progress through competition.”

Q: Hey, coach, I’m just curious what the last couple weeks have been like. You’re gearing up to get the season started and then you’ve got to deal with COVID. Was your team frustrated at all and how did they handle it?

“I think there’s a lot of frustration, but that’s how life is. I think we all have to recognize that all we can do is try and control the things we can control. I think it’s a good lesson for not just adults, it’s a good modeling opportunity for young players to see how others handle it as well. They’ve had a lot of opportunities to see that. We’re not going to be the only program that’s had to go through those challenges to date and I think probably others will experience it as well.”

Q: What does a typical gameday look like for you and do you anticipate any significant changes to your routine this season?

“I think there will be changes just based on the various protocols associated with the Big Ten testing and things that might be different in different facilities and some of the different facility things that are taking place as far as cleansing the facilities and having to share facilities and maybe not being able to be as free to move around as we have in the past. Everything will be different than it’s been in the past. Again, that’s an opportunity for the players to play and they should be appreciative that so many people have gone to bat to make that opportunity available for them.”

Q: Coming off of this pause, what do you think getting this season started is going to mean to your team?

“I’m sure they’ll be excited about it, but I also know that it will take some time to get everything organized and running the way we would like it to be. That’s just part of the challenges that are associated with trying to run a program during the pandemic. As I said, you’ve got to try and control the things that you can control, and that’s how I approach it.”

Q: What have you seen from other Big Ten programs across the country as the season got started?

“I watched a number of the matches. I think Wisconsin looks really strong. They have a lot of depth and they’ve looked really strong. I think Illinois has a lot of depth as well. I haven’t seen all of the teams play. I had a chance to see Minnesota play. Minnesota has a lot of returning players and they look real strong. Again, I haven’t seen all of the teams play. A couple of teams have been shut down, as we have, so I haven’t had a chance to see them. A number of the teams that I have seen, they have a lot of returning players. Certainly the teams that have returning players, especially at the key positions, have a leg up on the teams that are trying to break in newcomers in this sort of conference, as well as trying to fill roster gaps that might be because of health-related matters or injuries.”

Q: How did growing up in Chicago influence you as an individual and a coach?

“Well, growing up in Chicago just made me not get too overly reactive to weather storms like we have right now. I don’t know if it got me into coaching.”

Q: Coach, you obviously have a lot of experience in the college volleyball game. Is there anything that you draw from in your past experiences that you’ve relayed to your team that will benefit you guys going forward, obviously in regards to COVID, pauses, uncertainty, all that?

“Well, certainly I wouldn’t have any experience in dealing with a pandemic. I’m certainly one of the older coaches, but that was a hundred years ago. I think just the fact that everything takes time. They need to be patient and they need to be appreciative of the opportunity to play. They just really have to understand that a lot of people are going to go through similar situations throughout the season and they have to really be diligent about trying to take care of themselves. I think those are probably some of the lessons. They need to listen to the medical professionals and try to do the best they can to stay safe and work as hard as they possibly can. It’s certainly been an interesting season already if you look at a number of the teams that were able to play during the fall while a lot of teams passed and didn’t play. A number of conferences elected to not play at all. There are a lot of conferences and schools around the country that elected to look at things differently. That’s just an example of how everybody’s going to look at things and handle things — whatever they feel is the right decision to make for their institution or their conference. Players have opted out around the country. Everybody has to take a step back and decide what’s best for them. From my standpoint, everything is new. Trying to keep the players healthy and focused is probably going to be the biggest challenge for this staff and the various staffs around the country.”

Q: What can you tell us about the recruitments of Allie Holland and Sam McCool?

“Allie was a player who was [committed] to Tennessee and was just looking for a different location and wanted to play in the Big Ten. We were in a situation where we had a need for a third middle [blocker], so it was a really good match for us. She’s made some real nice contributions. She’s a physical player and works hard. Sam was a player who had been admitted to Penn State’s College of Engineering and wanted to play volleyball. I told her that I would give her an opportunity and take a look at her, and that’s really about the extent of the arrangement that we had.”

Q: Who made some of the best or most memorable plays during preseason practice or otherwise just stood out in general?

“There’s been a number of people who have been up and down, because it’s been such a challenge for people I think. We’ve had a number of people who have been in and out of practice at different times, so I think a number of people have improved. I would never want to highlight anybody at the expense of someone else, because I think that’s like me making a judgment call on how much somebody cares. I think we’ll get the opportunity for the players to demonstrate their passion for the game once we start playing, and we’ll let other people make that judgment call.”