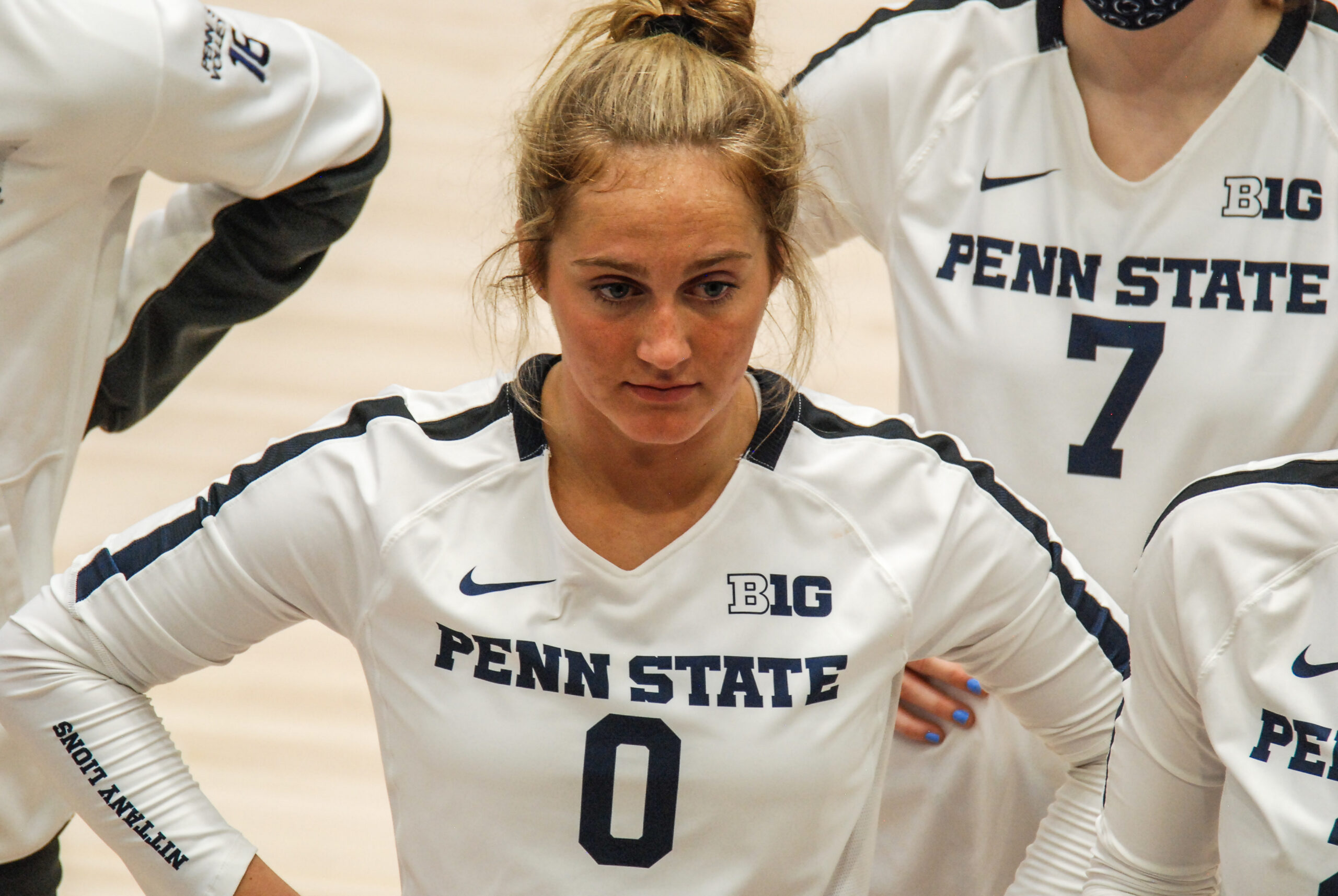 Despite a 20-kill performance from Jonni Parker, the No. 13 seed Nittany Lions suffered their first loss to the Longhorns in NCAA tournament action. Texas cut Penn State’s lead to 11-9 in the all-time series between these two programs with the win.

Logan Eggleston (22 kills), Sklyar Fields (21 kills), and Jhenna Gabriel (55 assists, 18 digs) were all outstanding for No. 4 seed Texas, which improved to 25-1 on the season and will face Nebraska Monday in the Elite Eight. The Longhorns outhit Penn State .353 to .221.

Russ Rose, who is now 105-33 in the NCAA tournament, won a huge challenge toward the end of the first set when Parker’s swing was eventually ruled in to make it 22-22. The Nittany Lions went on a 6-1 run to close out the first set, but Texas stormed back with a dominant showing in the second set to draw even.

Penn State had two chances to win an epic third set that featured 21 ties and no lead of more than two points, but the Nittany Lions couldn’t close things out up 24-23 and 26-25. Texas cruised to a quick 7-2 lead in the fourth set and managed to stifle Penn State’s efforts at a comeback.

Kaitlyn Hord had 13 kills on a .444 hitting percentage and tallied a match-high five blocks in the loss, while AC Fitzpatrick added a team-high 14 digs, nine kills, a block, and one of Penn State’s six service aces. Anastasiya Kudryashova had eight kills and Serena Gray recorded three of her own to round out the scoring. Gabby Blossom finished with 46 assists, six digs, two blocks, and an ace.

The Nittany Lions (10-6) will head into the offseason with plenty of things to work on, but there were also many positive takeaways from a challenging spring that tested players and coaches alike. Penn State returns the majority of its roster and will welcome five freshmen to the program from the 2021 recruiting class.

“I thought it was a really competitive match. It started out that way. The comeback at the end of the first game was great. I thought we were down a little at the start of the second game and had a number of opportunities to win in the third game. Texas kept finding ways to fend off some game points and found a way to win, then in the fourth game, as we did in the second game, just kind of started a little flat. As we knew going into the match, they were just more physical than us. They had 43 kills at the outside hitting position and that’s just way more than our production was at that position. Their ability to score at the outside hitting position was the primary factor, but I thought we played hard. I thought there were a number of things that I was really pleased with. I thought we blocked well. I thought our defense did well. We put ourselves in a position to win, which is what you always want to do. Especially when you’re the lower-seeded team, you have to have a plan. I thought we had a good plan. I’m certainly disappointed that we let some great opportunities slip by, because I thought we had a real good chance to win that third game. It was a great opportunity to play a championship. I think the people here in Omaha did a wonderful job putting it together. The NCAA, in my opinion, just did a fantastic job in doing everything they could to provide a quality experience for the student-athletes and the teams in a year where it was really next to impossible. There was no blueprint for how they could put it together and I think, to this point, they’ve just done an exceptional job. Kudos to the NCAA for their efforts. I’m sure my athletes are a little disappointed and I’m disappointed. It’s part of life. You don’t win every time you go into battle. It gave us an opportunity to learn some lessons about things we need to work on.”

Q: What impressed you about Jhenna Gabriel, Skylar Fields, and Logan Eggleston tonight?

“Well, I mean, certainly Logan and Skylar were the two individuals who we recruited, so I’m way more familiar with those two individuals. They had 43 kills and our outside hitters had 17 kills. What Texas depends on is the ability to be physical. Those individuals are very physical and they did a great job at those positions. We got good production from Jonni, who led us with 20 kills, and then Kaitlyn was next with 13 kills. We needed AC or Nasta to really be the next people to step up offensively and they weren’t able to do that. Texas is a big block. I think it was apparent that we had a little problem with beating the block.”

Q: What impressed you about the way the team came back in the first and third sets?

“I think we battled. The older players, the junior class, have a good fighting spirit. I think Gabby, Jonni, and Jenna [Hampton] have a fighting spirit that’s left over from when Kendall [White] was here. They’re going to keep on battling out there. I think the biggest thing that I have as a takeaway is we have to do a better job in recruiting. We need to get people who can terminate. That’s the gap that was way more noticeable this year than last year. Last year, we were getting better efforts from some people and we had Tori [Gorrell], who was able to take big swings for us. It was a real learning experience playing without Kendall this year. I think it was a real learning experience for AC and Maddy [Bilinovic] as freshmen. The responsibilities that Jenna had this year were far different than the ones she had last year. I think we had some sequences in the match tonight where, if we would have had a little better veteran play by some of the older players, we might have been able to win that game, and we didn’t do that. Part of it is we have to do better jobs as coaches. Maybe the players will do a better job comprehending what they need to do as well.”

Q: What are a few of your goals for the team heading into the offseason?

“To be honest, I’m not looking at that right now. I’m sorry, I don’t want to really look at that.”

Q: Coach, when you reflect on this season, what do you think about the way the team fought through some of the challenges and some of the unusual stretches they had to go through?

“That’s kind of what I talked about with the team after the match. It was such an unusual season. It started in August and we had starts and we had stops. We had so many different things that happened that made it so challenging for the players and the staff and the fans and the athletic department and so many people who were working behind the scenes to make the season happen. There are just so many moving parts. That’s why actually having an opportunity for these guys to have a championship is such a wonderful thing for them, because it was so challenging. I think the new players, it’s like asking the new students who came to school how they’re dealing with not having resident education. They don’t know the difference. It’s like, ‘I went to college, but I’m still in my bedroom.’ I think it’s been a real challenge for everybody. Hopefully people will all get healthy and get stronger. It’s been a long year. From my standpoint, it’s been an incredibly long year. I need time as well.”

Q: Heading into next year with potentially most of the roster returning, what are you looking forward to the most?

Hord: “Just to reiterate what Jonni said, I’m really excited just to work with these guys over the offseason, get stronger, build our chemistry even more, and then come back better than ever.”

Q: Kaitlyn, what were some of the biggest challenges that Texas provided for you tonight?

“Texas is definitely a lot different than the teams we had faced in our Big Ten season. I think if we would have gotten the chance to play Wisconsin, it would have been a little bit similar with their middles. I have a lot of respect for [Brionne] Butler and [Asjia] O’Neal on the other side of the net. It’s definitely challenging to hit around those huge hands. It was definitely a challenge, but I enjoy something different than what I’m used to.”

Q: Jonni, what can you say about the resiliency of the team this season fighting through a few different cancelations and just having an unusual season?

“I can say that for teams across the country, their resiliency to grow through this season is phenomenal. The things that teams had to overcome, the stops and goes, the protocols, everything, kudos to them for what we’ve been [through]. Big thanks to the NCAA for being able to put on a tournament for us. I think it was successfully run and I enjoyed being a part of it. I think the resiliency from this season is going to make volleyball very interesting in the future and I can’t wait to see it.”

Q: Jonni, how would you assess AC and Maddy’s performance on the defensive end tonight and in general this season?

“This season, AC and Maddy stepped in as freshmen with big shoes to fill. I think they did a good job, but also they learned a lot, like everyone has. They’re going to grow as players and as people on and off the court. I’m excited to see what their future brings here at Penn State.”

Q: Kaitlyn, what were some of your positive takeaways? I know it wasn’t the result that you wanted tonight, but what are some things that you can build on heading into next season?

“I was very impressed with just the fight we were able to have throughout, especially the first set. We came in with the mindset that we’re going to play to the very end and I believe that we showed that. We showed that we don’t give up. A point’s a point. It’s okay if someone blasts the ball at us, shake it off, next point. I’m really excited to see what our future holds and, like I said earlier, come back better than ever next year.”