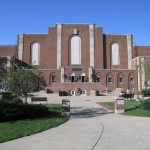 From the Stony Brook SID:

Seawolves fall in four sets to Villanova in season opener

University Park, Pa. – The Stony Brook volleyball team was defeated in four sets (23-25, 22-25, 25-18, 13-25) by Villanova in the Seawolves’ 2015 season opener Friday evening at Rec Hall on the campus of Penn State. In the defeat, Stony Brook falls to 0-1.
Highlights
– Freshman Morgan Kath (Milwaukee, Wis.) tallied 33 assists in her first collegiate match.
– Freshman Taylor Wilson (Corydon, Ind.) recorded four blocks in her first match as a Seawolf.
– Senior Kathy Fletcher (West Chicago, Ill.) led the Seawolves with 14 kills and six blocks. Sophomore Cydney Bowman (Lake Mary, Fla.) added five blocks.
– Stony Brook outhit Villanova .318-.179 in the third set, a 25-18 victory for the Seawolves.
– The Seawolves rallied from down 23-17 in the first set to pull to within 24-23 before the Wildcats scored the final point of the set.

From the Villanova SID:

The Wildcats (1-0, 0-0 BIG EAST) were led by Allie Loitz (Bonita, Calif./Bonita Vista) who recorded a 17 kill, 12 dig double-double in her Villanova debut.

“Loitz is great. She’s just a really good all-around volleyball player,” said Villanova head coach Josh Steinbach. “She handles the ball well. She can block. She can do it all.”

“Playing the first match you’re trying to figure out what you’re good at and what you’re not good at,” continued Steinbach. “We saw some things that we’re good at which is a positive sign.”

University Park, Pa. – The Villanova volleyball team kicks off their 2015 campaign with a weekend road trip to University Park, Pa. and the Penn State Classic. The Wildcats first game will be against Stony Brook on Friday, August 28 at 5:00 pm. On Saturday, Villanova will play Buffalo at 10:00 am and will finish the weekend with a match against No. 1 Penn State at 7:00 pm.