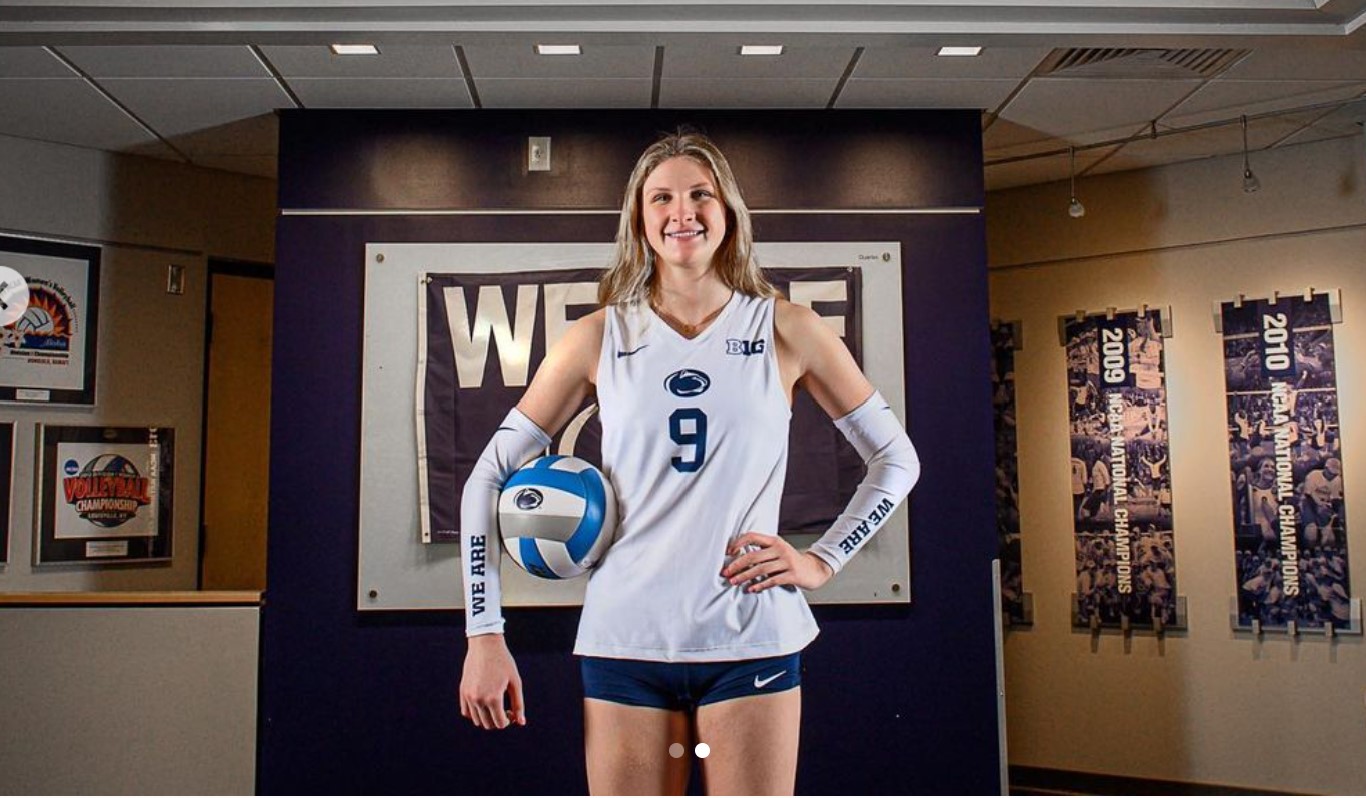 Katie Hurta, a 6-foot-1 setter/hitter from Palos Hills, Illinois, became the third member of Penn State women’s volleyball’s 2022 recruiting class when she verbally committed to the Nittany Lions on February 26.

Hurta was named the 2021-22 Gatorade Illinois Player of the Year after leading Nazareth Academy to the 2021 IHSA 3A state championship title as a senior last fall.

Hurta originally signed a national letter of intent with Indiana last November, but decided Penn State was the best fit for her after taking a visit to University Park.

Hurta recently discussed her Penn State commitment and several other topics, including her relationship with fellow incoming freshman Alexa Markley, in an exclusive interview with DigNittanyVolleyball.

What were the biggest factors in your decision to commit to Penn State?

“I chose Penn State because of the history of success. The coaches and the girls were amazing [on my visit].”

What was your impression of campus and the facilities when you took your visit? How many times have you been to Penn State so far?

“I have only been to Penn State once. On my visit, I was really impressed with Rec Hall, the football stadium, and the Penn State museum in the football field. I also loved the Creamery.”

What’s your relationship like with the Penn State coaching staff? What stood out about Coach Schumacher-Cawley’s message during your recruiting process?

“I’ve known coach [Daniel] Gwitt since I’ve been in 8th grade. My club coach is a Penn State alum and he played on the men’s team with coach Gwitt, and they have been best friends since then. I met coach Katie [Schumacher-Cawley] and coach Brian [Toron] on the visit and I really love their personalities and their coaching philosophies. Coach Katie went out of her way to answer all of my questions and make me feel at home.”

How were you introduced to volleyball?

“I have been playing volleyball since I was 9 years old. I followed in my sister’s footsteps and fell in love with volleyball from going to all of her tournaments.”

Do you have a preference between setting and hitting? What do you like about both positions?

“I love both. I like how when you set you have control of what is going on on the court, but with hitting I like having the power to end the rally.”

Have you spoken to Alexa Markley and Mandi Morioka yet? What are they like as people?

“I have played in the USA pipeline with Alexa Markley, so I’m good friends with her. She is amazing and one of the nicest people I have ever met, who will do anything for you. I haven’t met Mandi yet, but I’ve heard great things about her and am excited to get to know her.”

Did you interact with fellow Adversity alum Rachel Muisenga during club volleyball? What are you looking forward to most about learning from and competing with her?

“Rachel is a great player and I have always looked up to her. She’s super nice and welcoming and I’m excited to be on the same team as her.”

What was it like winning a state championship at Nazareth Academy as a senior? What do you recall about that match and celebrating with your teammates afterward?

“Winning the state championship was definitely the highlight of my high school career. Not only was the game itself an accomplishment, because it was a come-from-behind win, but I am proud to say that it was the first, not only for the Nazareth volleyball program, but also the first state title in any women’s sport at my high school. I am very grateful to have experienced such an amazing moment.”

What’s the volleyball culture like in Chicago and the Midwest in general? Are you a Cubs fan like Coach Schumacher-Cawley or a White Sox fan?

“Volleyball is very competitive and intense in Chicago. There are a lot of talented players and coaches. But I am grateful to have come from that culture, because I feel like it is a great foundation for college. In terms of sports, I am a Cubs fan.”

What are some of your strengths as a player? What are your goals as far as improving your game before arriving on campus at Penn State?

“I feel like I’m a good all-around player. My height and jumping ability have always helped. Before I get on campus, I plan to work on my strength, endurance, and consistency to get myself ready for a five-set match.”