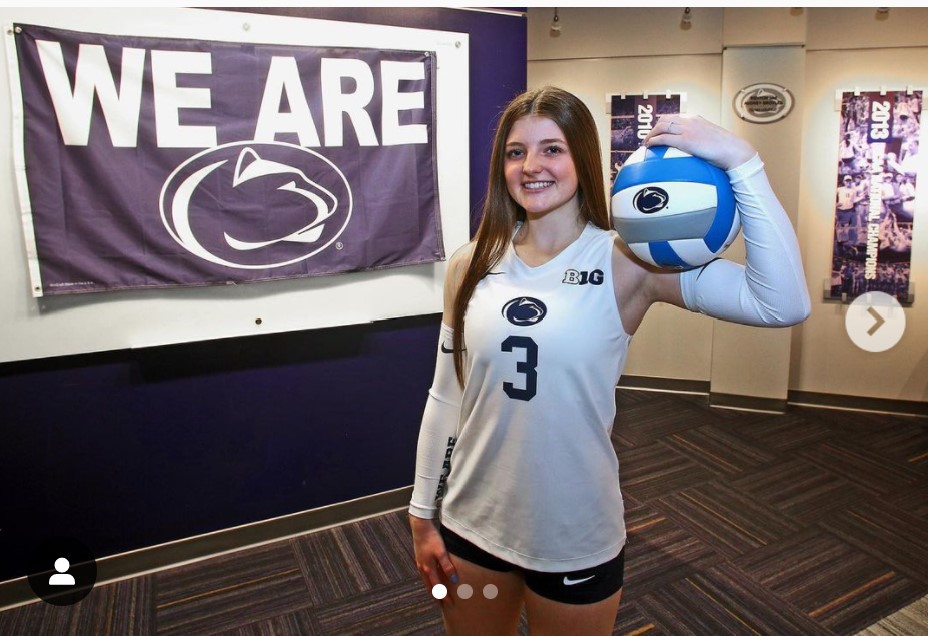 Gillian Grimes, a 5-foot-6 libero/defensive specialist from Westchester, Illinois, recently discussed her commitment to Penn State women’s volleyball, her friendship with Nazareth Academy teammate and fellow incoming freshman Katie Hurta, and several other topics in an exclusive interview with DigNittanyVolleyball.

Grimes flipped her commitment from Michigan State to the Nittany Lions on March 17, becoming the fourth member of Penn State’s 2022 recruiting class. Like Hurta, Grimes plays her club volleyball for Adversity and will arrive on campus this summer alongside Alexa Markley and Mandi Morioka.

Grimes’ commitment continued a strong offseason for new Penn State head coach Katie Schumacher-Cawley and her staff, which also secured commitments from Hurta and three transfers in Kashauna Williams, Taylor Trammell, and Zoe Weatherington. The full transcript of Grimes’ interview can be found below.

What were the biggest factors in your decision to commit to Penn State? Are there any Penn State players you particularly enjoyed watching growing up?

“I have always wanted to go to Penn State and loved watching them dominate in the Big Ten since I was young. I went to a camp when I was a freshman and loved the atmosphere of Rec Hall and the coaching staff. Kendall White has been someone I have always enjoyed watching. She is so fun to watch and you can tell that she really has fun while playing the game.”

When did you first start hearing from Penn State during the recruiting process? What stood out about Coach Schumacher-Cawley’s message?

“I was invited to a camp freshman year and was able to meet the staff then. I was blown away by the way they welcomed so many campers from all over the country and were still able to give me one-on-one attention. Coach Schumacher-Cawley sees potential in her players and trusts them to get the job done. Being a player who loves to be able to just go out on the court and play, this stood out to me the most. I also think having her be a [Penn State] alumna will help not only myself, but all new players buy into the process and really work hard.”

What was your experience like touring campus and the facilities? Did you meet any of the current players on your visit?

“I love the campus. There was always something going on and a place for everything. The views of the valley are so cool. I met the whole team on my visit and was able to hang out with them. They were all so welcoming and I am very excited to be with all of them this year. I can see myself fitting in with the team right away.”

How were you introduced to volleyball? How did your older sister’s playing career influence you?

“I was first introduced to volleyball by my sister, Maeve. She started playing volleyball in seventh grade, and being six years younger than her, I always went to her tournaments. Watching her play all the time made me interested in joining. Eventually, I was old enough to join a league and have loved it ever since.”

Who have been your biggest mentors to this point in your volleyball career? What’s the best piece of advice someone’s given you?

My sister, Maeve, has always been a player I have looked up to since I first started playing volleyball. I’ve admired her work ethic as a college athlete and all of her accomplishments she reached when she was in college. The best piece of advice I’ve been given was by my high school and club coach when she said, ‘Always go after what you want and follow your heart.'”

What’s your relationship like with Katie Hurta? When did you two first meet? How would you describe her personality and skill set?

“Katie Hurta is one of my best friends, and we’ve been playing together since we were 10 years old. We started out on an in-house team and haven’t been separated since. Katie is the type of person you always want to be around. She’s also the type of player you want on your side of the net. She’s the definition of a stud and clutch player, in my eyes.”

What was it like winning a state championship with Katie and the rest of your Nazareth Academy teammates? How would you describe that moment and getting your rings recently?

“Winning the first-ever girls’ state title at Nazareth Academy was by far one of the best experiences of my life, just because I got to do it with a team that was like family to me. I’m still speechless to this day about that state game, because it’s a feeling that not everyone gets to experience. I’m very proud and grateful for the opportunity to have experienced it. Putting our championship ring on for the first time a few weeks ago was incredible. Having the whole team there with me while wearing our rings really made it special.”

What are the biggest differences between high school and club volleyball? How would you describe the competitiveness of Chicago volleyball culture?

“There are so many great players and clubs in the Chicago area that play at a high level. My league is very competitive. I’ve never played in a league match where my team has not been tested due to playing against great talent. My high school and club experiences are similar because I come from winning teams. I’m very grateful to be a part of two great and highly competitive teams, but I would say club is more competitive due to playing teams all over the country. High school is so much fun because we play for our school and get to represent them, which is special to me.”

What are some of your strengths as a player? What skills are you focused on refining before enrolling at Penn State?

“I think my quickness and my reaction time will definitely help me be a great asset to the Penn State team. I am currently working on having consistent serve receive to allow my setters to run a full offense. I am also working on getting stronger physically and mentally. I believe being physically as well as mentally strong will help me compete with the Big Ten hitters who have been playing for years.”

What do you love most about playing volleyball? When did you first know you wanted to play in college?

“I love the competitiveness of the game and how every play is exciting and you never know what’s going to happen next. Everyone is always doing something and it’s never boring to watch. My sister played volleyball in college and my brother currently plays baseball. I have always known I wanted to play because they did. Having both of them play in college made it so important to me to follow in their footsteps.”