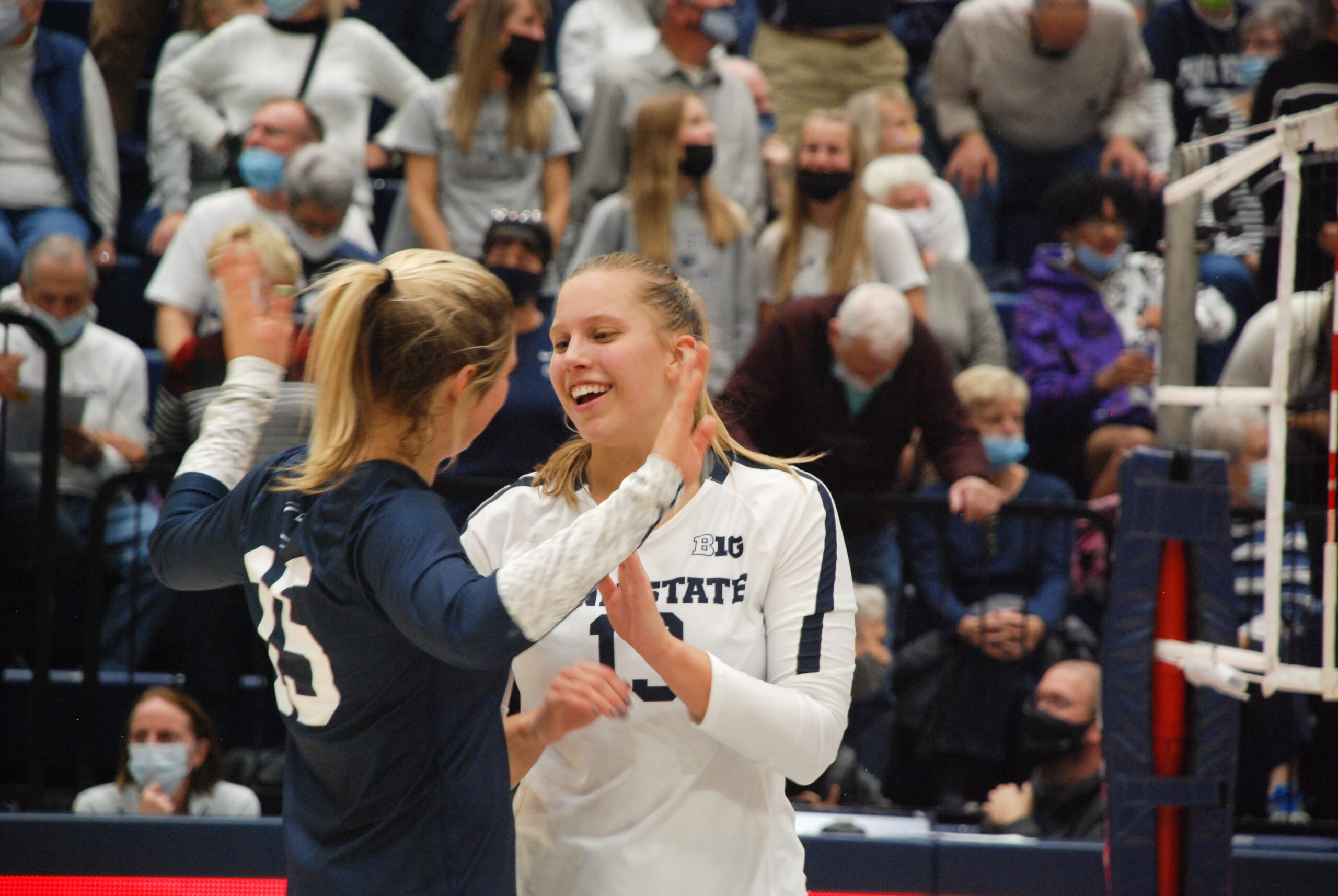 Blossom was named the Big Ten Setter of the Week for the seventh time during her career and third time this season after tallying 111 assists, while it was Hampton’s second occasion receiving Big Ten Defensive Player of the Week recognition following a 48-dig weekend.

Hampton and Blossom were joined by Minnesota’s Stephanie Samedy and Michigan State’s Julia Bishop as last week’s Big Ten honorees. Jonni Parker is the only other Nittany Lion to be recognized by the conference so far this season, earning Big Ten Player of the Week on September 6.

Russ Rose discussed Blossom’s personality off the court during his Tuesday press conference last week, saying he appreciates her competitive nature and individuality.

“Gabby is competitive all the time,” Rose said. “She’s loud and she is who she is. I’m a big believer that people should be who they are. I think Gabby brings a lot of fun intangibles to the table.”

Blossom is third in the Big Ten with 10.96 assists per set this season, trailing only Wisconsin’s Sydney Hilley (12.01) and Ohio State’s Mac Podraza (11.79) in that category. Blossom has led Penn State’s offense to the second-best hitting percentage in the conference at .278 with six matches to play in the regular season.

Hampton has established herself as one of the best liberos in college volleyball in her second season as Penn State’s starter at the position. She took over the job from Penn State’s career digs leader, Kendall White, prior to her junior campaign last spring.

“She always plays hard, she always has a smile on her face, she’s resilient physically, which is a really important thing, in my mind, for that position,” Rose said of Hampton. “For us, I always want my libero to be a good passer. She’s our best passer.”

Hampton is known for her hustle and toughness, and she put that on full display against the Spartans last Saturday, diving into the bench to keep a ball alive in the fourth set.

“I mean, that’s part of the game,” Hampton said afterward. “That’s honestly one of my favorite parts of the game are those crazy plays, because it really gets momentum for our team. Those are just my favorite plays. Nothing really going through my mind. I was going all in. I wasn’t stopping there.”

Hampton leads the team in digs with 373 so far this season heading into this weekend’s road matches at Michigan and Michigan State. Hampton is now just 80 digs away from becoming the latest Penn State player to reach 1,000.

“I’m just so happy for her,” Blossom said of her roommate earlier this season. “She’s so good at volleyball, but she’s so much more than a good volleyball player. She’s a great leader. Everyone loves her. I’m so excited for her. It’s cool when your best friends are doing amazing things. I’m just glad I get to watch and be a part of it.”

Blossom, a third-team AVCA All-American as a sophomore in 2019, is having another excellent season in her third campaign as Penn State’s starting setter. The three-time team captain, alongside Parker, is currently 73 assists away from reaching 3,000 for her career and 25 short of 1,000 this season.

Blossom and Hampton are extremely close off the court, so naturally their chemistry on it is impressive to watch.

“We’re hand in hand,” Hampton said. “We’re always together. When she’s not with me, everyone’s asking where she is. She’s one of my best friends, and I think she’s grown so much as a player and a person here, and is a really good leader.”