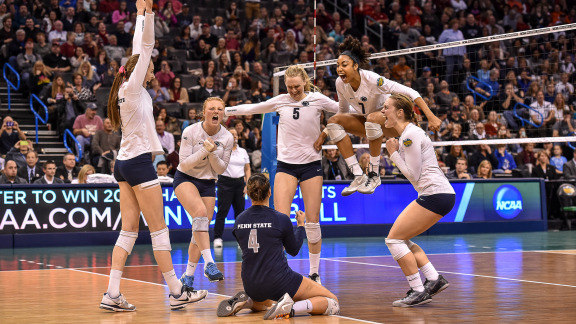 At the post-season banquet for the 2014 Penn State Women’s Volleyball team, Head Coach Russ Rose announced the winners of the 2014 Coach’s Award — Dominique Gonzalez — and the 2014 Pops Award — Lacey Fuller.  (He also announced the three team captains for the 2015 team — 6-2 Sr. OH Megan Courtney, 6-4 Sr. RS/Opp. Aiyana Whitney, and 5-6 Sr. libero/DS Kendall Pierce, which we cover in a separate post.)  Below are the winners of the Coach’s Award and the Pops Award from 2010 through 2014, plus “Then and Now” videos for Dom Gonzalez and Lacey Fuller.

The Coach’s Award (we believe it’s selected by Coach Rose — thus the singular) is awarded after each season to a player whose contributions were crucial to the team’s success and who embodied the qualities of leadership, toughness, competitiveness and commitment that Coach Rose values so highly.

Dom Gonzalez joined the Penn State Women’s Volleyball team in 2011, and was a team Captain in 2013 and 2014. She was a calm and steadying presence on the court, with a superior first-touch on serve-receive. Passing was a strength and her defense was solid.  Coach Rose praised Dom Gonzalez throughout the season — saying on more than one occasion that he wouldn’t trade her, and all she brought to the team, for any other libero in the country.  She will be missed.

The Pops Award is given each year to honor the memory of Clyde “Pops” Work, a very early fan of the team from the 1980’s (there is also a “Clyde ‘Pops’ Work Women’s Volleyball Scholarship).  He was the grandfather of one of the Penn State players, who adopted the team (and was adopted by the team), traveling to all of its matches and, as an 80-year old, shagging balls during practices.  He was tough, and Coach Rose described Lacey Fuller as a very tough player that Pops would have liked.

Lacey Fuller played with energy — fast, hard, and seemingly with disregard for life, limb and Newton’s Law of Universal Gravitation (see photo above). She competed all-out for every point and was as tough as they come.  She’ll be missed too

Dom Gonzalez: Then and Now 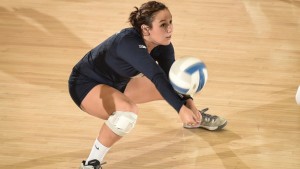 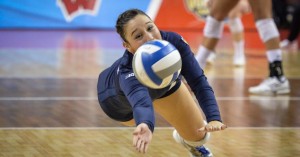 Lacey Fuller: Then and Now 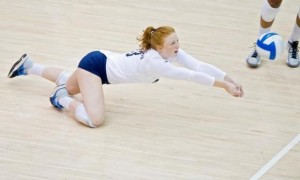 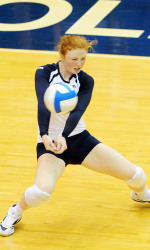 Below is Lacey Fuller’s “Meet the Freshman” video, followed by an interview with her after Penn State’s victory in the 2014 NCAA Championship match.  Energy, anyone?